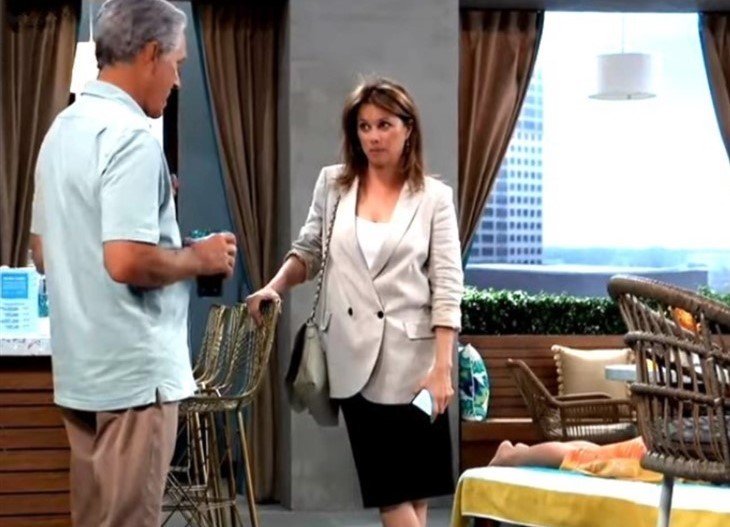 General Hospital spoilers indicate that Port Charles residents are still reeling after the loss of Brando Corbin (Johnny Wactor). Suddenly, a third attack has taken place and spoilers indicate that it could be none other than Sonny’s lawyer, Diane Miller (Carolyn Hennesy). Will Diane’s attack give them confirmation that these killings are about Sonny Corinthos (Maurice Benard)?

General Hospital spoilers reveal that Diane will be onscreen right before this grisly discovery. It seems Diane will meet someone, likely Alexis Davis (Nancy Lee Grahn) at the Metrocourt before this gruesome discovery. Alexis discovering her friend is only fitting considering how worried she is about this case. Alexis just released an article that the police don’t like because it tips their hand.

Alexis would no doubt question her article about the killer if Diane is attacked. Gregory has already warned Alexis that the article could cause more harm than good. Could Alexis blame herself for Diane’s attack much like she did Neil Bryne’s (ex-Joe Flanigan) death?

With Brando Corbin (Johnny Wactor) and Ava Jerome (Maua West) being the first two victims, Esme Prince (Avery Kristen Pohl) is looking very guilty. Diane being the next victim would certainly drive that home. Diane did go after Esme hard in court while representing Trina Robinson (Tabyana Ali). No one knows how evil Esme can be if this is true.

Ryan Chamberlain (Jon Linstrom) could be doing this attacking and making it look like Esme is back from the dead. After all, Esme is supposed to be Ryan’s daughter and if he knows she’s missing, he will certainly want the guilty parties to pay. However, Ryan would have been more likely to have used the toxin when attacking Ava. Esme would have used the toxin on Josslyn to make sure to get rid of her once and for all.

Hennesy announced a few weeks ago that she was hitting the stage in LA for a new project. Hennesy will star in The Secret World of Archy & Mehitabel. Don Marquis, the columnist for the Evening Sun, inspired the production following his musings. “The play tells the story of a newspaper columnist known as The Boss, played by Bill Chott (Wizards of Waverly Place), who comes upon a rather large cockroach on his manual typewriter! The insect, known as Archy, is played by Dan Gilvezan (Feud). Hennesy is portraying the role of Mehitabel, Archy’s best friend. The show is directed by former child actor Moosie Drier (The Bob Newhart Show).”

Carolyn’s project could be a reason to have Diane hurt or even killed. Perhaps Carolyn is just too busy to reprise the role anymore. Is Diane the next victim? Will Diane live or die?