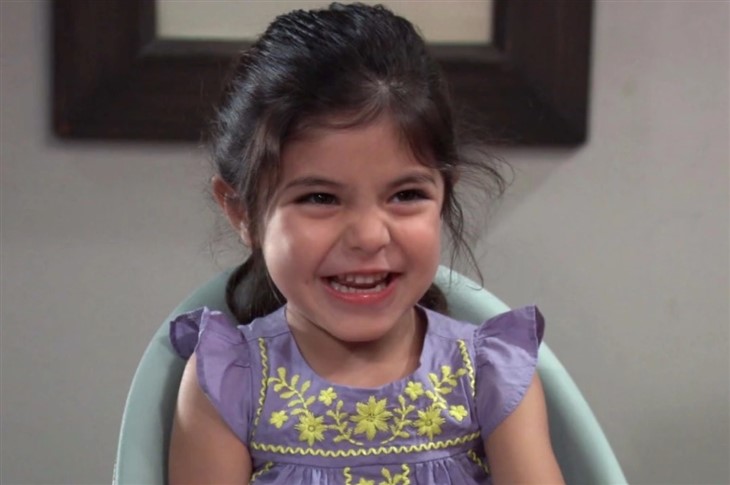 General Hospital’s Donna Corinthos (Ava Rose) is the only living biological child of Sonny Corinthos (Maurice Benard) and Carly Corinthos (Laura Wright). Donna was born on September 30, 2019. The character of Donna was named for Donna Messina, the head of the GH hair and makeup department who passed away in December 2018.

General Hospital’s Donna was conceived on New Year’s Eve but Carly didn’t tell Sonny about her pregnancy until Valentine’s Day. Sonny was very worried about the pregnancy because of issues in previous pregnancies. Carly was also kidnapped by Ryan Chamberlain (Jon Lindstrom) and thrown over an embankment. Both Carly and Donna’s life were endangered by this action. Carly tried to save herself but she ended up taking a bad fall. Carly was saved by Jason Morgan (Steve Burton) who miraculously found her and saved her. Jason took Carly to the hospital and things turned out to be fine. However, that does not mean that problems didn’t arise later.

In June 2019, General Hospital’s Carly learned that her baby had a condition called Spina Bifida. This means that the baby had developed fluid around her spine and would have to be delivered by C-section. Sonny and Carly finally got a diagnosis when genetic testing revealed that Donna had Spina Bifida and could have other very serious issues. Doctors knew that Donna would have to have surgery as soon as she was born. Once Donna was delivered, doctors discovered that her spina bifida wasn’t as serious as they thought but she still required surgery to fit her back.

General Hospital’s Donna was mentioned a lot but rarely seen as a baby. However, Donna was SORASED by August and had begun to call Jason daddy in Sonny’s absence. Jason didn’t feel right about Donna calling him dad because she was Sonny’s child. Carly and Jason had planned to get married but Sonny came home to his family. Donna had to get used to having her father back home. Donna has been raised very closely with her half-sister, Avery Corinthos (Ava and Grace Scarola). Donna has been SORASED to be closer to Avery’s age and is now in school. Now Donna’s parents are getting divorced and she will have to face not having them together again.

Donna was a huge surprise for her parent but is truly loved. Donna’s full biological brother Morgan Corinthos (ex-Bryan Craig) was killed in a bomb explosion. Morgan inherited Sonny’s bipolar disorder which should be a concern with Donna later on.