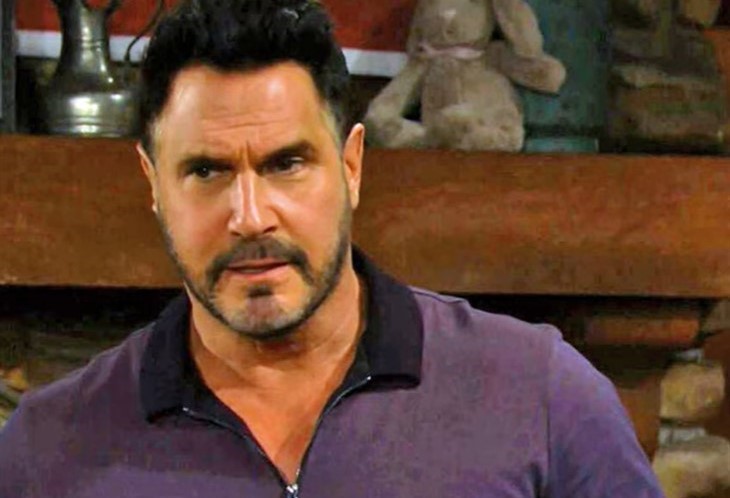 Longtime viewers of The Bold and The Beautiful know that Dollar Bill is not one to sugarcoat anything, and he certainly doesn’t mince words when he talks to his sons about what he thinks about Ridge Forrester! Wyatt and Liam Spencer (Darin Brooks, Scott Clifton) will be in for a real earful of torrents of every derogatory description Dollar Bill can come up with when expressing his opinion about Ridge leaving Brooke for Taylor Hayes (Krista Allen)!

At least, that will be the narrative that he has likely heard, although Liam will likely fill in the pre-story about Brooke falling off the wagon and Deacon Sharpe (Sean Kanan) was spending the night while Ridge was out of town on New Year’s Eve! The events leading to Ridge leaving Brooke were much more complicated as well as convoluted, and Dollar Bill will likely be sympathetic to Brooke!

It wasn’t that long ago that it was Dollar Bill who caused the problem that broke up Brooke and Ridge – with a lot of help from Quinn Forrester (Rena Sofer) and Shauna Fuller (Denise Richards)! That was the last time that Ridge had moved into the gatehouse, as he is doing this time and not continuing to stay at the cliff house, where Taylor is living with their daughter Steffy Forrester Finnegan (Jacqueline Macinnes Wood) and her family!

Viewers of The Bold and The Beautiful will remember that Ridge and Brooke had separated and then had reconciled, deciding to tear up their divorce papers but Quinn interfered, trying to get Ridge and Shauna together. Bill and Brooke had been alone together in Hope Spencer’s (Annika Noelle) cabin and got caught up in a moment, making out in front of an open window and Shauna captured it on her cell phone. Then Quinn downloaded it to a digital photo frame and showed it at Ridge and Brooke’s reconciliation party and a drunken Ridge flew to Las Vegas with Shauna and married her!

The Bold And The Beautiful Spoilers – Dollar Bill Spencer Is Angry

The Bold and the Beautiful spoilers show Dollar Bill still cares for Brooke, and he’s very angry about Ridge dumping her for Taylor for what he considers less than what he and Brooke were doing in the cabin! Liam will again try to explain what happened, what didn’t happen, and in what order; Dollar Bill will think Ridge should have taken into account that Brooke was drunk!

Dollar Bill has probably used being drunk to excuse bad behavior many times in the past himself, although people generally understand that drinking doesn’t cause bad behavior but it releases inhibitions, making it more likely to happen! But he keeps going back to Ridge being way too hard on Brooke, and he gives no excuses for Ridge waffling back to Taylor after so many years!