General Hospital: Who Is Betsy Frank? 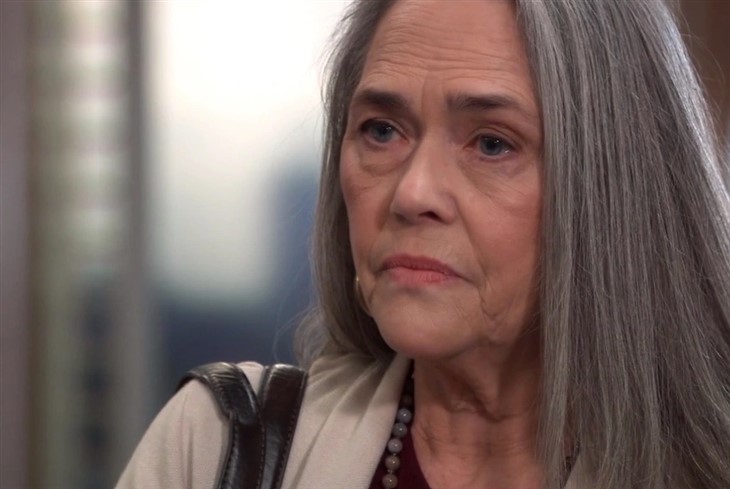 General Hospital’s Betsy Frank (Deborah Strang) has resurfaced after not being heard from since Franco Baldwin’s (ex-Roger Howarth) death. Who is Betsy and why is she back in Port Charles?

General Hospital’s Elizabeth “Betsy” Frank has appeared sporadically on GH since 2010. Betsy first appeared in 2010 when Franco kidnapped Aiden Spencer (Enzo De Angelis) from GH shortly after his birth. Franco took the baby and gave him to Betsy as a gift. Franco wanted to make up for being a bad kid so he thought Betsy should have a chance to raise another child.

Betsy illegally adopted by Franco and Jason Morgan’s twin brother, Drew Cain (Cameron Mathison). Drew was hurt at the age of three and had to leave the home. Franco, it was later revealed, was trying to protect Drew from being molested by Jim Harvey (Greg Evigan), Betsy’s on-again, off-again boyfriend. Franco had believed that Drew had died until Jason Morgan returned from the dead to come face to face with his twin.

GH Spoilers – Betsy Frank Has Popped Up a Few Times

General Hospital’s Betsy usually only popped up when something was going on with Franco. In 2013, Betsy was pulled into the search of what was supposed to be Franco’s daughter who turned out to be Kiki Jerome (ex-Hayley Erin). Of course, it was later discovered that neither Franco nor Kiki were Quartermaines.

Kiki remained in town and found her father Silas Clay who was later murdered by Madeline Reeves (ex- Donna Mills). Betsy was again brought in when it was revealed that Drew Cain was alive and well and living in Port Charles as Jason. Betsy turned up missing later on and was discovered to have been kidnapped by Harvey. Betsy was rescued by Jordan Ashford (Tanisha Harper) and Curtis Ashford (Donnell Turner).

Eventually, General Hospital’s Drew confronted Betsy who told him how he was sent away after his fall down the stairs into her basement. Betsy explained to Drew how Franco tried to protect him and allowed Harvey to molest him instead. Drew then saved Franco from being strangled by Jim when Franco confronted Jim over his actions. Drew ended up killing Harvey and finally paid Franco back for all his sacrifices. Franco and Drew grew close again but Drew was later presumed dead and Franco was murdered in his absence.

Betsy arrived in Port Charles unannounced on February 28, 2022, leaving Liz Baldwin (Rebecca Herbst) to wonder if Betsy is the one stalking her now.

The Bold And The Beautiful Comings And Goings: A Model and Two Characters Return