GH Spoilers: What Should Drew Do About Victor? 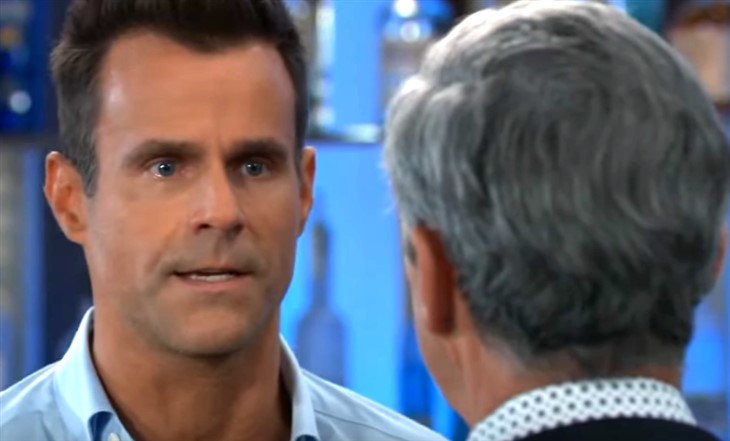 General Hospital (GH) spoilers and updates tease the question of what should Drew Cain (Cameron Mathison) do about Victor Cassadine (Charles Shaughnessy) is one that is on a lot of General Hospital viewers’ minds lately. Here is how 2,000 fans voted in a recent online poll.

General Hospital viewers will recall that when Drew came back from Cassadine Island, he was deactivated but apparently not totally deprogrammed so apparently there is a different “key” to control him besides the tarot cards Peter August (Wes Ramsey) used. Victor had been trying to get Peter to give him the key to control Drew, and Peter double crossed him as usual – now that Peter’s graveyard dead, he’ll have to find another way. However, if that key was the control chip Dr. Patrick Drake (Jason Thompson) found in “Jake Doe’s” brain and removed, Victor might just be out of luck, Peter himself having implied that what he had been doing with the tarot cards and commands was a backup method of his father’s! However, without being totally deprogrammed, General Hospital viewers know Drew faces a problem as to what to do about Victor!

The main consensus among General Hospital viewers seemed to be that Victor needs to be taken down and brought to justice permanently – whether that means Steinmauer or deadly justice like came to Peter! General Hospital viewers will recall in a recent episode of General Hospital that Laura Collins (Genie Francis) and Anna Devane (Finola Hughes) had already discussed taking Victor down, after Sam McCall (Kelly Monaco) brought a video of Victor and his henchman Johann Bauer (Max Decker) talking on the pier. Robert Scorpio (Tristan Rogers) sent a copy to the WSB who identified him, and determined Johann had been in the vicinity of Luke Spencer’s (Anthony Geary) fatal cable car accident when it happened. Drew would be an excellent addition to that takedown team, with 75% of fans agreeing Drew needs to take Victor down!

Around 24% of General Hospital fans participating in the online poll agreed that Drew, with his Navy Seal training would be just fine taking down or out if necessary, Victor on his own. General Hospital fans know this doesn’t mean necessarily Drew’s going rogue to hunt down Victor, it just means not involving others as part of a team for their own protection. Drew could easily consider Victor his problem to solve since he was behind his capture and incarceration for over two years and not have any problems taking him either out or down on his own. He would likely inform Anna and the PCPD of his plans though, since he could wind up with some trouble of his own if they didn’t know anything about what he was going to do! The last thing Drew would need would be to mistaken as a bad guy!

The remainder of General Hospital viewers, a small 1% of the total, thought maybe Drew should just avoid Victor and situations involving him and let Victor think Drew’s invisible. General Hospital viewers know that is not going to help matters any, Victor has henchmen all over the place that are quite interested in recapturing Drew! Drew was just minding his own business getting on an elevator at GH on his way to return money to Afghanistan the last time he disappeared for two years and presumed dead, what do these measly 1% of fans think trying to avoid Victor will do? That plan just kind of seems – well, dumb!

The Bold And The Beautiful Comings And Goings: A Model and Two Characters Return