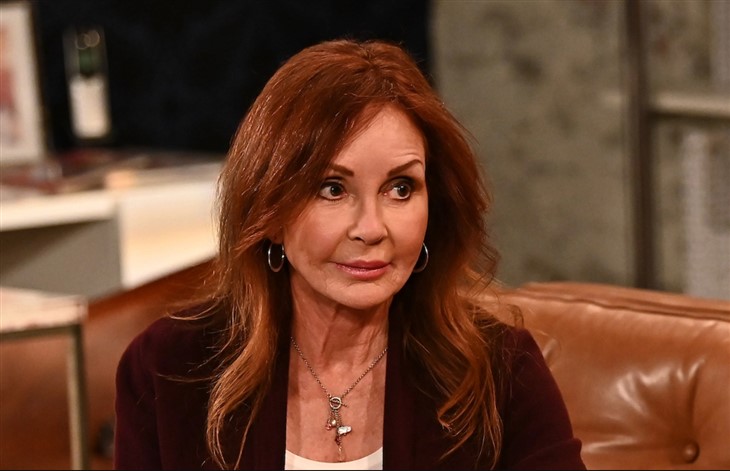 General Hospital Spoilers teases Carly Corinthos (Laura Wright) isn’t going back to Port Charles the same woman she was when she left. When Carly heads home, it’ll be with completely different opinions about two major players in her life — her moms. Yes, moms, plural. Both her adoptive mother, Virginia Benson (Leslie Nettleton), and her birth mother, Bobbie Spencer (Jaclyn Zeman) have some answering to do — and Carly will bring the questions.

Carly has been rather irritated during her time away in Jacksonville. Luckily, Drew Cain (Cameron Mathison) showed up recently to play travel companion, and he’s been a pleasurable distraction. But Carly’s trip is about to take a turn for the worse. Since her first full day in Florida when she discovered the Jacksonville Beautification Guild’s plans to build a parkway over her adoptive mother Virginia’s final resting place, she’s been hard at work trying to make sure they can’t.

But the biggest surprise Calry might receive while she’s in Florida is still lying in wait. What will happen as Carly continues to take a trip back into her past as Caroline Benson? What memories might she unearth — and how will she manage the way they shake her to her core?

Things have been slow to start in Jacksonville — which Drew, with Virginia’s gravesite, and with her journey to self-discovery. Carly will question whether she’s too old to be going through this kind of transformation. Shouldn’t she have all of her childhood traumas figured out by now? Maybe not.

The potential is high that Carly is going to find out her adoptive mom never died, and Carly might have to contend with how it makes her feel that she still chose to leave Carly behind. There’s a good chance Peyton Honeycutt (Linda Purl) will play some sinister role in the development of how Virginia came to be declared dead, but it’s anyone’s guess as to why.

If Carly finds out Virginia is alive, she’s going to demand answers. This is Carly we’re talking about. She’s going to accept nothing but all the answers — and she’ll want them starting yesterday. Will Virginia take the blame for staying away, or will she share with Carly that she was forced to comply and there were external forces she couldn’t control? Might someone back home in Port Charles know the truth? Could Carly’s two moms have conspired to keep this secret from her, and if they did – why? Stay tuned for more news, updates, and spoilers on this and more GH madness that lies ahead.