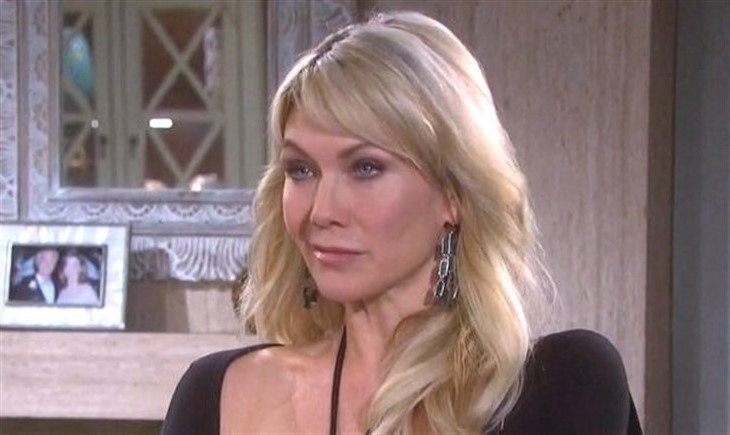 Days of Our Lives spoilers and updates tease a desperate Kristen DiMera (Stacy Haiduk) will turn to Dr. Marlena Evans (Deidre Hall) for help. Kristen thinks that if anyone can influence Brady Black (Eric Martsolf) to dump Chloe Lane (Nadia Bjorlin) so he’ll turn to her she can, and she’ll bargain for a cure.

Days Of Our Lives Spoilers – She’d Better Hurry Up

Kristen knows that she has what Marlena, Kayla Johnson (Mary Beth Evans) and Kate Roberts (Lauren Koslow) need to survive, so she’d better hurry up! In the process of getting Dr. Wilhelm Rolf (Richard Wharton) to resurrect Stefan DiMera (Brandon Barash) and brainwash him, she found out he was working on a cure for the toxin. She found out in the custody court where Brady denied her custody or visitation of their daughter Rachel DiMera (Finley Rose Slater) that Marlena had been poisoned by a toxin.

Through Rolf, she found out not only Marlena, but Kayla and Kate are near death’s door and Orpheus (George DelHoyo) had broken into his lab and stole a death serum. When the orchid blooms, it is the flower Rolf needs to formulate his antidote and save the three women’s’ lives, and John Black (Drake Hogestyn) knows it.

DOOL Spoilers – The Only Mother He’s Ever Known

Even though Brady’s mother was Isabella Toscano (Staci Greason), Marlena is the only mother he’s ever known, Isabella having died when he was very small. He was raised by his widowed father until John and Marlena married and she became his stepmother. It is his birth mother Isabella his little sister Belle Brady (Martha Madison) was named after in honor of his late mother; that is why John sometimes calls Belle “Izzy”. Kristen knows that she has a bargaining chip with the orchid if she can get Marlena to influence Brady in exchange for the cure. Of course, in the long run even if her plot works, Brady will resent her for bargaining his mother’s life for his cooperation, but Kristen will deal with that later.

Kristen already tried to convince Rolf to kidnap Chloe and brainwash her into falling back in love with Stefan so she’d dump Brady and Brady would run to her. Rolf flatly refused, and told her even if he did there was no guarantee Brady would return and didn’t give her a chance to ask if he’d brainwash him. So bargaining a cure from the orchid for Marlena in exchange for her convincing Brady to reconcile is all she’s got.

Kristen knows even if she has to get John involved in the bargaining, she could convince them to in order to save Marlena. But she goes to an increasingly ill Marlena first to bargain the cure from the orchid for her life, in exchange for convincing Brady to reconcile with her.