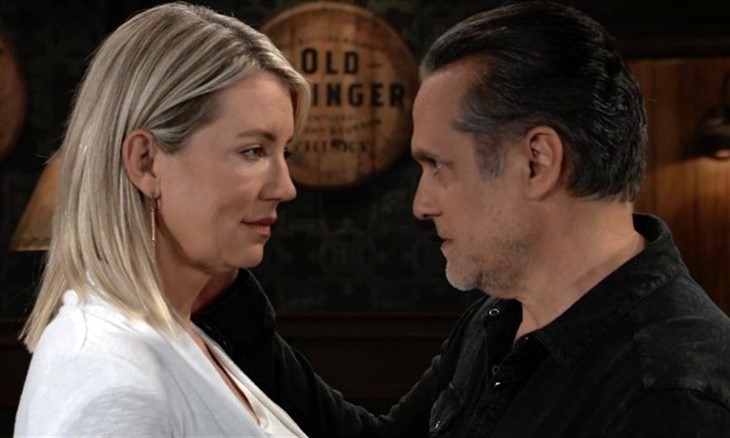 General Hospital spoilers reveal that slow burn that’s been playing out for the last nine months between Nina Reeves and Sonny Corinthos finally becoming a roaring flame as they finally do the deed some fans will hate and others will rejoice in.

Sonny has all the romance Carly Corinthos could want set up at The Haunted Star and he’s just waiting for Carly to show because a grand gesture is the only thing Sonny can do to get her back — or so he thinks. He also thinks he wants her back, but is that only because that is what he thinks he is supposed to want?

It’s Kristina’s concern about her dad and her discussion about it with Phyllis that prompts Nina to go check on Sonny on the boat considering how she left him at the hospital. Did he really see the doctor? Is he back on his meds? Are the meds just not working yet as they do take time after someone has been off of them? Either way, Carly doesn’t show and Sonny is heartbroken and maybe has to face the fact that things are over between them.

At least Nina is there to be an emotional comfort to him, but she also becomes a physical comfort where they make it to one of the staterooms and end up in bed together.

General Hospital Spoilers – What Will ‘Sona Eddy’ Lead To?

“He can’t help himself,” Maurice Benard said in the February 15, 2022, issue of Soap Opera Digest. “It just happens so they go into the bedroom.”

Benard also explains Sonny’s mindset and how those feelings are there and he just can’t deny them any longer even if he doesn’t want those feelings to be there. “The reason this story for me works, is because Sonny can’t help what he feels,” he said.

“When you fall in love with somebody for nine months, even if you weren’t yourself, the feelings are going to be there…I understand Carly’s point of view and I don’t want to compare it to mental illness but I do think Sonny needs to get rid of this. And maybe that’s the arc later on. But as of this moment, the fact is that he’s got these very confusing feelings that he can’t control and Nina’s right there in front of him and thing’s happen.”