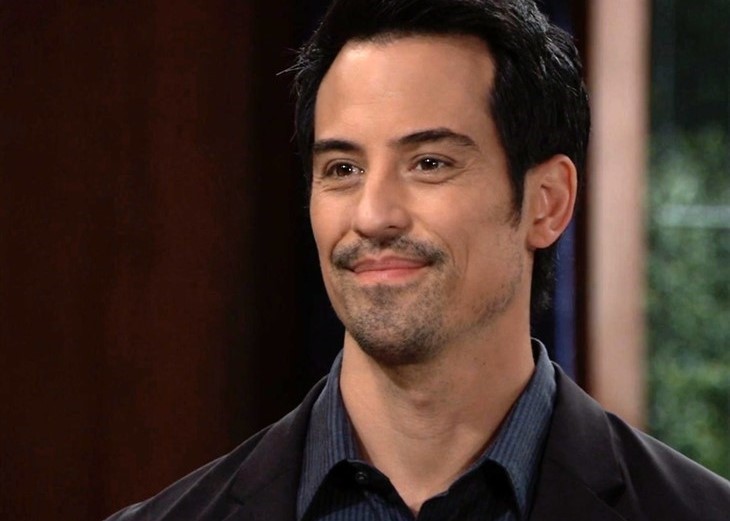 General Hospital spoilers and updates tease that Nikolas Cassadine’s (Marcus Coloma)  redemption might be Esmé Prince (Avery Kristen Pohl) and Ryan Chamberlain’s (Jon Lindstrom) takedown! As he gets Esmé’s internship reinstated at Spring Ridge, Nikolas might find out more than she wants and use it against her and Ryan in future GH episodes!

One thing that demented daddy Ryan didn’t teach his equally demented daughter Esmé is never try to out-Cassadine a Cassadine, even though both of them are experts at deception! Esmé threatened to tell Ava Cassadine (Maura West) about her and Nikolas’ naked romp if he didn’t get her reinstated and un-banned from Spring Ridge. They nearly got caught with their literal pants down when Ava and Spencer Cassadine (Nicholas Chavez) returned to Wyndemere Castle unexpectedly – Esmé snuck out onto the parapet in her undies!

Esmé planned to use that major indiscretion of Nikolas’ to her advantage all along, whether it be a positive pregnancy test or something else. She came across Nikolas and Ava talking about divorce with Scott Baldwin (Kin Shriner) at the Metro Court and she knew her chance had come!

Esmé blurted out she thought Nikolas was keeping their secret, and she quickly covered by saying she was planning a surprise for Spencer-some surprise!  Nikolas excused himself and took her outside to talk to her, making clear this was not a breakup – it was a fresh start divorce and he and Ava were definitely together! They were getting divorced only to get remarried again and that’s when Esmé blackmailed him into getting her internship reinstated after explaining Dr. Kevin Collins (Jon Lindstrom) was overprotective concerning Ryan.

That gets the wheels turning in Nikolas’ brain as to why Kevin would worry Esmé was obsessed with Ryan – he thought it was merely to terrorize Ava! Nikolas portrayer Marcus Coloma recently told Soap Opera Digest Nikolas doesn’t react to the blackmail like most people would!

Longtime viewers know that manipulation and blackmail are the Cassadine family’s stock and trade, and Nikolas is really no different even though Laura Collins (Genie Francis) is his mother! Nikolas has not been a knight in shining armor for years, nearly as long as when he first came to Port Charles as a teenager. He donated bone marrow to his ailing baby sister Lulu Spencer (Emme Rylan) but faking his death for five plus years leaving Spencer out of the loop overshadowed that memory!

Finding out Ryan has been faking his locked-in syndrome and hiding a daughter who may actually even be his niece or a kidnapped child of past victims might redeem Nikolas. If one watches Esmé closely, she’s really afraid of Ryan and afraid to not do his bidding and commit crimes to win his approval!

Esmé’s feelings for Nikolas are real – and show just how deep her daddy wound really is. Deep inside, she wants a daddy like Nikolas not a daddy like Ryan, and that is what drives her deep need for approval and acceptance. But she crossed the daddy relationship line when she took advantage of Nikolas’ weakness and seduced him, and he knows you have to sometimes fight fire with fire.

Esmé desperately wants a mother too, and in fact her birth mother may be right there in Port Charles but neither one knows the other’s related. Nikolas may have to manipulate Esmé to save her because that’s all she knows – and if he exposes Ryan in the meantime he may come out a hero!