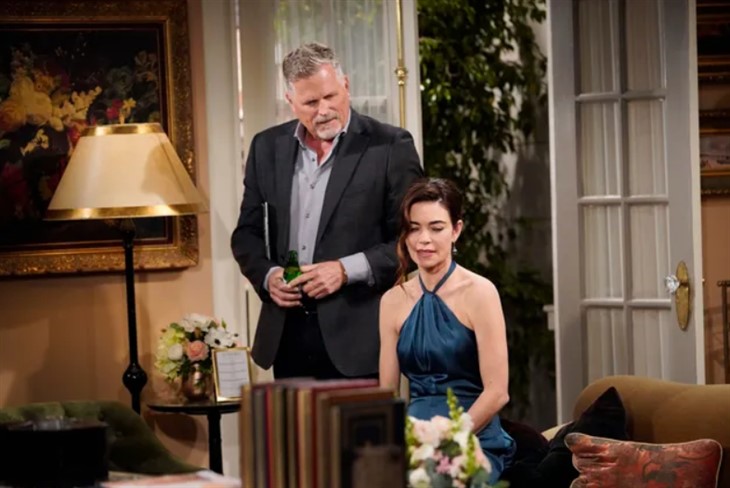 The Young and the Restless spoilers document that Victoria Newman (Amelia Heinle) was conning Ashland Locke (Robert Newman) all along. She never wanted to reconcile.

It appears that Victor Newman (Eric Braeden) was not fully clued in, as Victoria said it was not her father’s idea when asked by Ashland. She has concluded that her one-time, brief husband is nothing but a manipulator.

He seems to have lost everything, with his company absorbed by a restored Newman Enterprises and the half-billion he received for leaving Newman-Locke and agreeing to the annulment now gone. But will the so-called Lockeness Monster revert to his nickname?

Victoria strongly underscored the defense of her family when telling Ashland off. She lambasted his backstory and all he did to her and the Newmans.

It is fair to reinforce that Ashland’s cancer lie was hideous. He had no qualms about using that emotional hammer to worm his way into Victoria’s heart and mind. Then, when caught, claimed that their love was real.

Ashland believes that Victoria would be better off with him, despite all he has done, and to abandon her loved ones and children. What form of respect does that represent?

Y&R Spoilers – Ashland Locke Takes It All In

Viewers may have thought Ashland was going to respond badly. But he retained his composure and took all that Victoria said in.

However, Ashland’s public bravado involved his many exploits in New York. He was proud of being known as the Lockeness Monster. Later, after moving to Genoa City, Wisconsin, and not being able to blame the Big Apple’s ultra-competitive atmosphere for his actions, Ashland implemented the cancer lie to perfection.

Since this is soap, fans are anticipating payback. How Ashland replies, who he targets, and what the timeline will be are all important soapy questions.

The Young And The Restless Spoilers – Victor Newman Feeling Better

Victor was beside himself in recent months. He was okay with Ashland’s past and believed he loved Victoria, no matter what he currently claims.

Ashland sold Cyaxares to Victor, which became a show-me project for Adam Newman (Mark Grossman). As viewers recall, Adam was outwitted by Ashland as well.

Victoria’s revealed plan will bring peace of mind to the Moustache. But the Newman’s will need to close ranks as Ashland’s pride was damaged. He probably has some stashed financial resources that can be tapped and potential anti-Newman helpers available. Most importantly, he has little to lose.