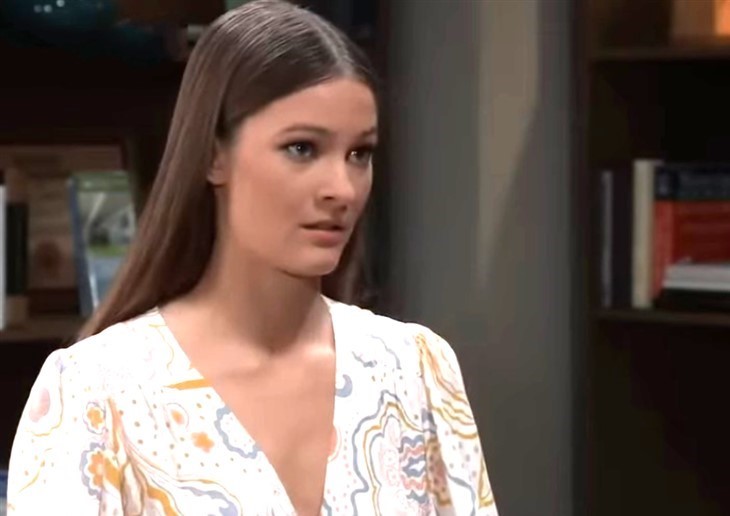 General Hospital (GH) spoilers tease that Esme Prince (Avery Kristen Pohl) hasn’t yet shown her more devious side to Nikolas Cassadine (Marcus Coloma) just yet. But recent events will show Nikolas exactly who Esme is and it should prove to be a real eye-opener. Esme successfully seduced Nikolas and promised to keep it a secret from both Nikolas’ wife, Ava Jerome (Maura West), and his son Spencer Cassadine (Nicholas Chavez), who is also Esme’s boyfriend. But recent events will bring out Esme’s true self.

Dr. Kevin Collins (Jon Lindstrom) has had Esme’s privileges, including her entire internship at Spring Ridge, revoked. Esme has been using her internship to get closer to her secret biological father, Ryan Chamberlain (also Jon Lindstrom). Kevin, unaware of his own relationship with Esme, was concerned that Ryan was manipulating Esme. He would be right, as it was Ryan who encouraged Esme to sleep with Nikolas.

Ryan is responsible for Esme’s presence in Spencer’s life. Esme preyed on Spencer’s hatred of Ava and encouraged him to stalk her. Esme was even responsible for setting fire to Ava’s car, without Spencer’s knowledge. It’s clear that Esme is unhinged and that Ryan is using that to further his own ends. But now that Kevin has made Ryan inaccessible to Esme, she will certainly take desperate measures to reinstate her privileges.

Nikolas will be floored that Esme will use their night together against him. She had successfully fooled him into feeling sorry for her up until this point. But even as Nikolas begins to see Esme’s true colors, he will be powerless to do anything about it. If Esme reveals their indiscretion to Ava and Spencer, he could lose both his son and his wife. But Nikolas can be pretty devious on his own so look for him to find a way to get out of Esme’s grip! Nikolas knows exactly how dangerous Ryan is and the threat he poses to not only his wife but to all of Port Charles.

Will Esme keep quiet? Will Esme and Nikolas’ affair be exposed? And will Nikolas realize that Ryan is the one pulling the strings? Anything can happen in Port Charles so stay tuned to General Hospital airing weekdays on ABC. And don’t forget to check back right here regularly for all your General Hospital news, information, and spoilers!