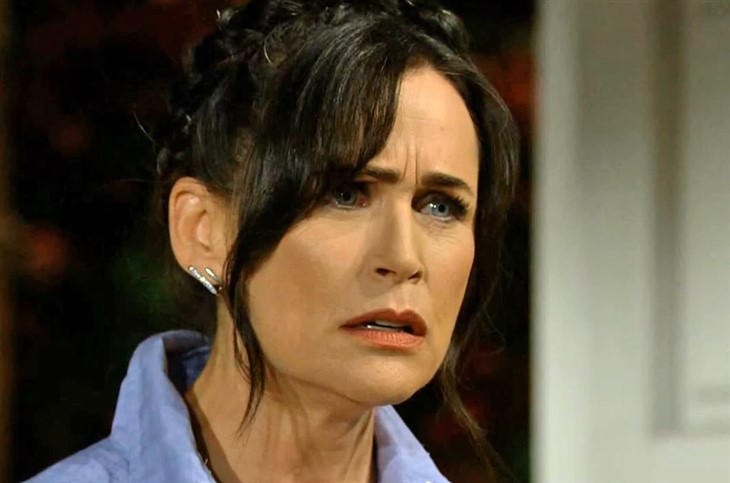 The Bold and The Beautiful spoilers and updates tease unfinished business will be finished in upcoming BOLD episodes! Quinn Forrester (Rena Sofer) isn’t just letting Donna Logan (Jennifer Garies) get away with her affair with Eric Forrester (John McCook) even though she has happily returned to Carter Walton (Lawrence Saint John)!

BOLD fans thought it a little strange that Quinn didn’t jump on Donna and try to strangle her when she and Bridget Forrester (Ashley Jones) discovered the affair! Donna certainly was afraid something like that might happen as she hid under the sheets beside Eric; but maybe Quinn has a delayed reaction. Quinn also could have been holding back because of Bridget being with her and when Donna got dressed, Bridget and she left the scene together.

Viewers will recall that Bridget is Brooke Forrester’s (Katherine Kelly Lang) daughter with Eric, so Donna is her aunt – it makes sense that Quinn wouldn’t attack Donna with her there. Eric was there also beside her in bed so that would also make sense for Quinn to hold back.

B&B Spoilers – Quinn Forrester’s Anger Will Probably Build Up When She Comes Out Of Shock!

It was easy to tell that Quinn was somewhat in shock and maybe a little bit of denial when she and Eric formally broke up! Quinn had denied herself and tried to get rid of her feelings for Carter to make things work out with Eric and here he’d been fooling around with Donna! Quinn’s anger when it sinks in will likely build up like a volcano against both Donna and Eric, but Donna will be a much easier target!

Back when she first heard about Donna’s “honey cure” from Brooke Forrester (Katherine Kelly Lang) she demanded Eric fire Donna, and he did – but now he’s reinstating Donna’s job. He’ll make a special announcement at work that Donna is returning to her former job, and Quinn won’t like it!

Donna’s portrayer, Jennifer Garies spoke to Soap Opera Digest recently about Donna’s false sense of security when it comes to Quinn’s rage which no doubt will come to the surface!  Jennifer noted that while Donna feels safe and protected when she’s with Eric, Eric can’t be with her twenty four seven although he’s like to! Donna recently talked to her sister Katie Logan (Heather Tom) about her reconciliation with Eric and hoped Quinn’s reconciliation with Carter worked out.

It would be natural to think that if Quinn is happy with Carter she won’t care about Donna and Eric being together. But more than likely, Quinn’s calm is just the calm before the storm when the volcano will also erupt!

During the week of July 11, volcano Quinn will finally erupt, and she’ll corner Donna when she’s alone, startling her and frightening her! Since Quinn, Carter, Donna and Eric all work in the Forrester Creations office, Quinn may opt to corner Donna somewhere else!

Quinn was humiliated right in front of Bridget when they made the discovery of Donna and Eric in bed in that bungalow at the club! Quinn portrayer Rena Sofer also spoke to Soap Opera Digest recently and noted that to Quinn, ANY Logan is an enemy and she’ll definitely be a Donna attack! There promises to be a fierce catfight between the two of them when volcano Quinn erupts!