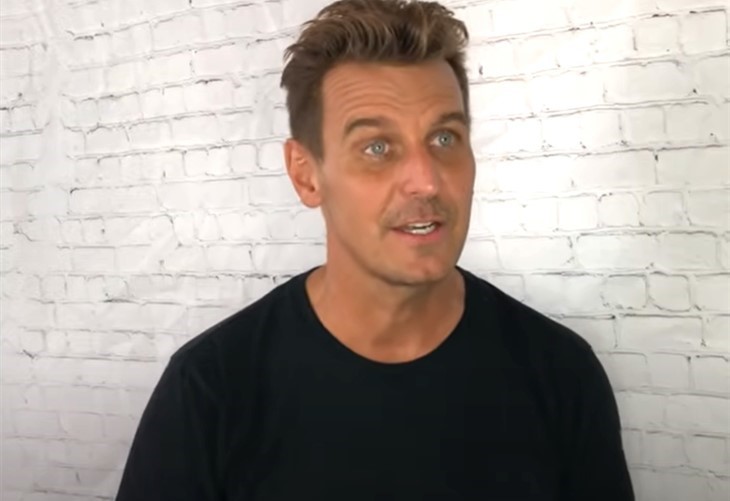 General Hospital (GH) spoilers reveal that Ingo Rademacher, who played Jasper “Jax” Jacks on the ABC daytime drama, was let go after refusing to comply with the network’s coronavirus vaccine mandate. To date Steve Burton (Jason Morgan) is the other actor to have suffered the same fate.

Tonight he posted a series of pics of himself and his three beautiful children, with some words superimposed.

: “DEFINITELY A BIG YEAR.
-HAD A BABY
-GOT FIRED FOR ….NOT
FOR ME (syringe and face palm emojis)
-FILED LAWSUIT (NOT FUN)
-2022 WHO KNOWS BUT
LOOKS GOOD
GH spoilers: Ingo Rademacher Shared His Feelings on Insta
On a separate screen he posted: HAPPY NEW YEAR Y’ALL
LOTS OF LOVE AND SUCCESS
IN 2022
WE WILL PROBABLY BE IN BED BY 8:30 (cry face and shrug emojis)

GH Spoilers – What Happens Next in Port Charles, New York?

Rademacher was fired Nov. 5 after he submitted a request for a religious exemption that was denied. Next he filed a lawsuit against the network in LA Superior Court. According to Deadline, “ABC’s actions are blatantly unlawful,” proclaims a jury trial seeking complaint filed … “ABC does not have the authority to force a medical treatment to its employees against their will. These actions constitute religious discrimination and violate Mr. Rademacher’s rights under state and federal law.”

Rademacher told Tucker Carlson that Covid is akin to, “a serious flu bug,” and claimed that there is a lack of evidence that vaccines, “do a good job at stopping the spread,” of the coronavirus. He also asserted that Disney/ABC, “would have canceled the long-running soap if conservative cast members refused, en masse, to comply with the vaccine mandate.”

He went on to say that his colleagues on the long running serial, “kind of knew that the mandates were coming a few months ago because Disney had already started mandating for their theme park employees.” Rademacher said, “he received private support from some cast members and crew, a unified stance could have resulted in cancellation.”

“Let’s say everybody was standing up for me,” Rademacher said, “if we were all linking arms together and said, ‘We’re not taking this vaccine,’ Disney would have just canceled the show. That’s what I believe. We’re kind of that show over here on the side that has a slot. We’re always walking on thin ice.”

Today his GH colleague Kirsten Storms (Maxie Jones) announced on her Insta that she has been diagnosed with coronavirus and is doing, “good, not great,” but feels better every day.

Days Of Our Lives Spoilers: Chanel Will Quickly Discover Something Is Wrong With Johnny!