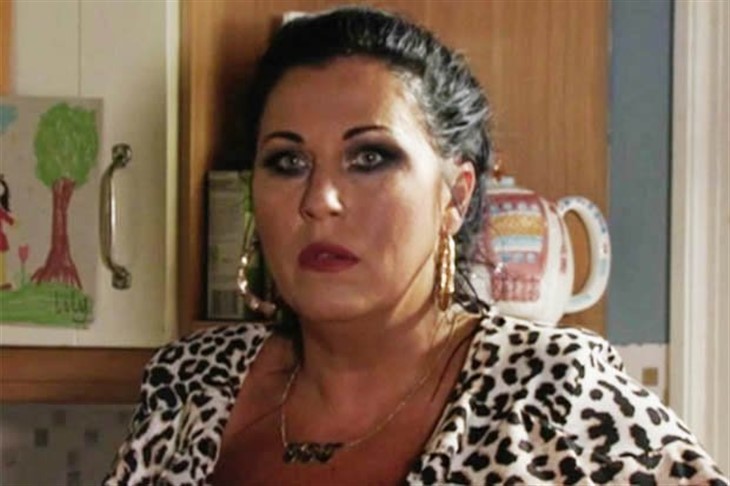 EastEnders spoilers and updates tease that Kat Slater (Jessie Wallace) will face problems concerning her fiancé Phil Mitchell (Steve McFadden). She’ll be forced to sign in for a package and she’ll be shocked at what she finds.

Kat Slater was extremely happy when Phil finally agreed to marry her. However, as expected, being in a relationship with someone like Phil, isn’t easy, especially now that he’s in prison. In upcoming scenes, she’ll get involved in Phil’s shady business.

In scenes set to air this week, Ben Mitchell (Max Bowden) pays Kat a visit and tells her that she has to sign for a package and keep it hidden for Phil. Kat doesn’t want anything to do with the package but Ben insisted and said that it’s her problem now.

At first, Kat refused to accept the package. However, she’ll eventually give in after visiting and talking to Phil in prison. The latter asks Kat to take the package and keep it for him, or else his safety in prison will be at risk.

Kat accepts the parcel but gets horrified when she discovers what’s inside. She’ll hide the package at home. Later on, she’ll give Ben a piece of her mind. She’ll accuse him of failing to be there when his father needed him the most. What does the package contain? Will keeping it put her life in danger?

EastEnders – Tommy Moon Takes Matter Into His Own Hands

As for Tommy Moon (Sonny Kendall), he’ll find himself in deep trouble. He’ll take matters into his own hands and decide to deal with the bullies who have been giving him hell at school.

Tommy will confront his bullies when he finds them breaking into Billy’s (Perry Fenwick) cash box. The confrontation leads to a physical altercation. When Ben finds them, he assumes that Tommy tried to steal from the cash box.

Tommy tries to run away but he gets cornered by his bullies, who threaten him once again. Tommy realizes that he’s on his own. Thinking that nobody wants to help him, Tommy decides to confront them on his own. However, his actions may land him in danger. What will Tommy do? Will he be able to convince his bullies to stop? Or will he end up getting beaten instead?