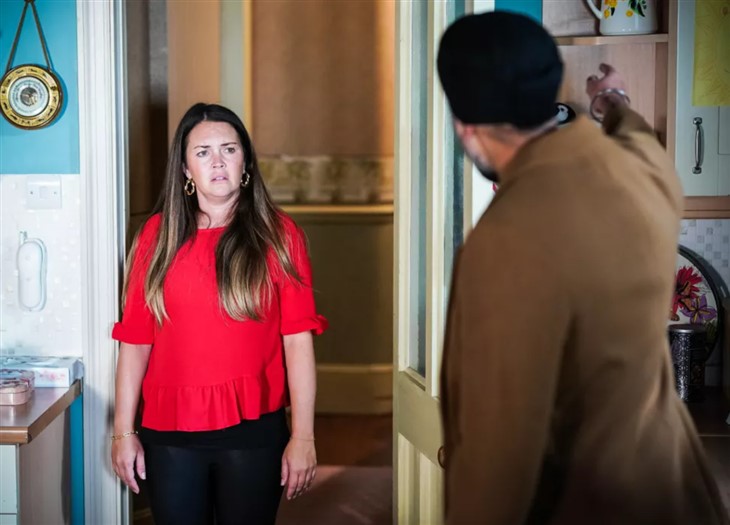 EastEnders spoilers and updates tease that Stacey Slater (Lacey Turner) and Kheerat Panesar (Jaz Deol) could be one of the next couple in Walford. The show is about to revisit a past spark between the pair next week.

Fans may recall that Stacey and Kheerat had a one night stand back in 2020. However, they never had the chance to explore their budding romance because Stacey went to prison.

Now, Stacey and her new marker venture, Stacey’s Baps, is doing well. But there’ll come a time when she’ll need some help and Kheerat will be the one to help her.

It all starts when Jean Slater (Gillian Wright) informs Kat Slater (Jessie Wallace) that Tommy Moon (Sonny Kendall) doesn’t want to go to school. She also turns to Phil Mitchell (Steve McFadden) for some business advice and the latter tells her to use bribery instead. She follows Phil’s suggestion and offers the new market inspector, cake so Stacey can get a good spot on the market.

However, the market inspector will make it clear that she doesn’t accept bribes and drop a hint to Stacey that she’s referring to her Jean. Stacey will be furious at her mother.

When Stacey opens her new business venture, she’ll have a long line of customers waiting to be served. One of them will be Kheerat. Unfortunately, Kheerat will get food poisoning from her van. Dr. Nina will give him a house call and she starts to flirt with him and Stacey will also drop by to apologize.

Ben will also inform her that someone paid the balance for the repairs to her van. She eventually realizes that Kheerat paid the difference. Later on, she visits him to thank him. However, they’re sweet moment will be interrupted by Vinny Panesar (Shiv Jalota). But Kheerat will manage to visit her later and give her a kiss on the cheek. Will this be the beginning of a new romance in Walford?

Spoilers hint that Gray will panic when a gas explosion causes the Argee Bhajee to be cordoned off. He’ll then pose as an insurance broker and tell the builder that he needs to assess the damage. He’ll then be informed that everything needs to be stripped away, which will leave him worried that Tina Carter’s (Luisa Bradshaw-White) body may be discovered.

Sister Wives Spoilers: Kody On The Hot Seat – Are You In Love With Janelle?