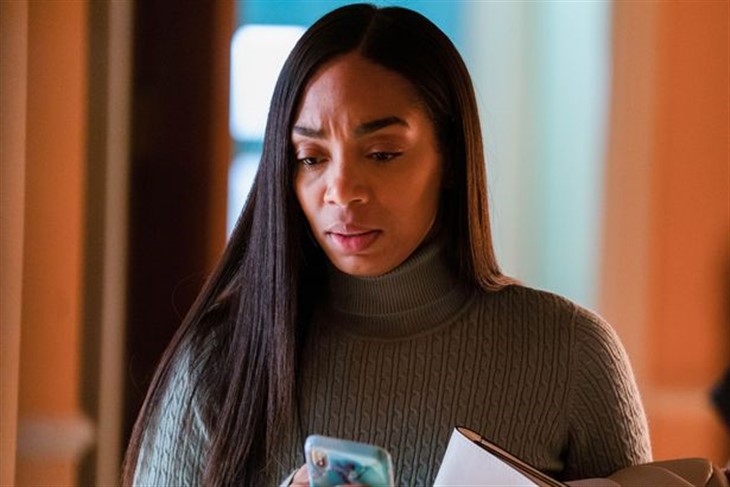 EastEnders spoilers and updates tease that Chelsea Fox (Zaraah Abrahams) will receive heartbreaking news about the condition of baby Jordan in the hospital. Will the doctors be able to save him?

Fans have been watching Chelsea and Gray Atkin’s (Toby Alexander Smith) story unravel after the former found out about her husband’s murderous secrets. With baby Jordan currently in the hospital, Chelsea has found help in Kheerat Panesar (Jaz Deol). The latter recently informed Whitney Dean (Shona McGarty) that he found a flat where Chelsea and baby Jordan can stay.

Kheerat also wants Chelsea to realize the importance of spending quality time with her family. So, he asks his mom, Denise (Diane Parish) to give Chelsea a pamper session and tell her that it’s a gift. While Chelsea relaxes at the salon, Kheerat gives Gray a lift to the hospital.

Kheerat tries to make Gray confess but his plan gets derailed as the doctors rush to baby Jordan. Meanwhile, Chelsea’s relaxing day at the salon was interrupted with a call from Gray. He called to let her know that their son had stopped breathing. Fans have to tune in to see if baby Jordan survives or if Chelsea will lose her baby.

Zaraah Abrahams, the actress behind Chelsea’s character, opened up about her alter ego’s birth certificate plot. She said that her character is “clinging to anything that gives her hope.”

“She has run away to another country before, so running away isn’t a big thing for her. She invests all her thoughts and feelings into it,” the actress added.

When asked whether Chelsea feels safer with Kheerat and Whitney around, the actress said that she’s thankful that they’re keeping an eye on her. However, she also feels that the pair has an ulterior motive. She doesn’t feel like “she’s the priority” in everything that is happening at the moment.

She thinks that Gary is just too smart and there’s nothing she can do to escape him. She’ll come to believe that she just needs to accept her situation and just let things happen.

1000-Lb. Sisters: How Fans Believe Tammy Slaton Is Continuing Her Cycle Of Abuse In Season 3