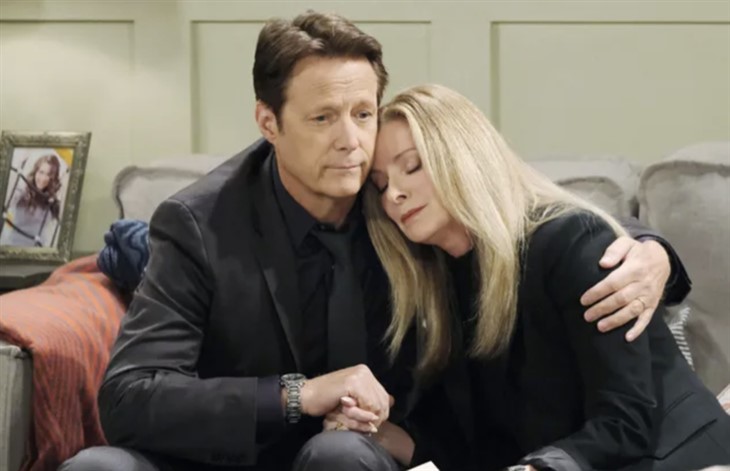 Days of Our Lives spoilers and updates tease that Jennifer Deveraux (Cady McClain) will be caught with the pills she’s addicted to. Gwen Rizczech (Emily O’Brien) will be the one who catches Jen red-handed and she’ll tell Jack Deveraux (Matthew Ashford).

Days Of Our Lives Spoilers – A Real Problem

Jennifer does have a real problem here, because when Maggie Kiriakis (Suzanne Rogers) caught her with pills that fell out of her purse, Maggie addressed it too. But Jennifer for one appeared to make up a story about the pills, and then afterwards she threw the bottle away but then fished it back out of the trash. They appeared to be some sort of opioid pain pill, and while Jennifer isn’t trying to get high on them, she’s trying to mask her grief and cope.

Using pills to mask grief or other kinds of emotional pain is an addiction that is difficult to admit and even more difficult to cure. The addicted person must have a breakthrough where they admit they need help, to be able to receive it.

DOOL Spoilers – How Does Gwen Rizczech Catch Her?

A very good question is how Gwen will catch Jen and the pills, since they generally stay far, far away from each other. Perhaps they are together in a public place, such as Horton Town Square but Jennifer is caught in the act of taking them and Gwen sees it. Gwen likely doesn’t confront her, but you can bet she’ll get some video or photos on her cell phone from a discrete location. If it’s the square, there are plenty of places to hide where Gwen can take the video of photos, since she knows she won’t be believed with no proof. Perhaps afterwards she’ll sneak up and bump into her on purpose so she can see what Jennifer is taking; Gwen probably could tell she was up to something.

Days Of Our Lives Spoilers – Busted

On September 27, Gwen will finally tell Jack what she saw and expose Jennifer’s secret addiction to him, but she won’t do it to be vindictive. Gwen has no reason anymore to be vindictive towards Jennifer, she no longer has a sister to compete with over Jack, and she realizes Jen is in trouble. Gwen may never find redemption in anyone’s eyes in Salem, but that doesn’t mean she wants her father to lose his beloved wife.

Gwen will be careful when she tells Jack what she knows about Jennifer, and she’ll show him any photos that she may have taken. Gwen, unlike Jack, doesn’t know that Jennifer had previous problems with addictions so he probably won’t need proof to believe her.

GH Spoilers: Will Ghost Mike Show Up At Brando’s Funeral?