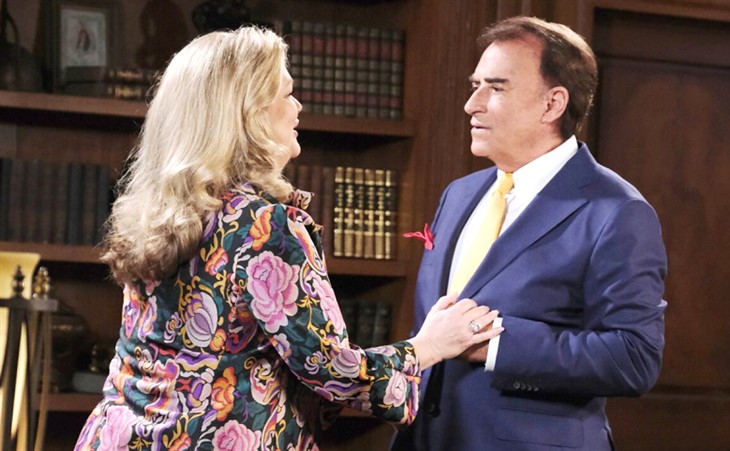 Days of Our Lives (DOOL) spoilers and rumors tease that Tony and Anna DiMera (Thaao Penghlis, Leann Hunley) will notice something strange about Johnny DiMera (Carson Boatman) in future episodes of Days of Our Lives!

Days Of Our Lives Spoilers – The DiMera’s New Year’s Eve Party Is On!

Days of Our Lives viewers will see many of the DiMera family members gathered for a party on New Year’s Eve, along with a few assorted Hortons, Prices, and at least one of the Grants! Days of Our Lives viewers can imagine that this may double as a celebration for Johnny and Chanel Dupree DiMera’s (Raven Bowens) recent wedding, since it is such a mixed group and family members of both Johnny’s and Chanel’s are present. Among the guests are Tony and Anna, who have just returned from their own vacation in Europe, and the only DiMeras not seen are Chad DiMera (Billy Flynn) and his family, and Jake DiMera (Brandon Barash). Tony, Anna, and many of the rest of the guests including Allie Horton (Lindsay Arnold) and Lani Grant (Sal Stowers) raise a glass and make toasts, but soon Tony and Anna begin to notice something strange about Johnny!

Days of Our Lives viewers will recall that Tony and Anna have some catching up to do – they’ve been gone since John Black (Drake Hogestyn) and Susan Banks (Stacy Haiduk) were rescued from the DiMera crypt! Days of Our Lives viewers will remember that Tony called 911 for Susan, who had stabbed herself rather than obey the devil and kill John as MarDevil , the devil in Marlena Evans (Deidre Hall) had told her to! Tony and Anna should have been updated by now to let them know that the devil was no longer in Marlena and it is assumed therefore no longer a threat, possibly finding out before they returned! But before the night is over, Tony and Anna will notice something different about Johnny, but not be able to quite put their finger on it. It will be absolutely terrifying when they figure out what it is!

Days of Our Lives viewers can understand that Tony and Anna may notice things that are off or different before others do, since they’ve been away for a while, plus they were around when Marlena was possessed the first time. Anna may actually be the more perceptive of the two of them; Days of Our Lives viewers will remember she was the one who exposed “Steveano” DiMera (Stephen Nichols) and speared him right in the eye with a well-aimed spike heel! Anna may also be the first one to notice something’s definitely off and different about Johnny than before they left for Europe, and she definitely will pick up on Johnny’s red suit! True, the bash does appear to be a formal affair with men in at least business suits and the women are dressed like for a prom; but something about that red suit disturbs Anna!

Days of Our Lives viewers will also see that others besides the very perceptive Anna notice something strange about Johnny and it’s way beyond just his suit! Something about Johnny’s personality has changed – he seems much more snarky and he’s just not acting like a man who’s a newlywed and with a wife who looks like she’s developed a five month baby bump overnight! Days of Our Lives viewers will see that even EJ DiMera (Dan Feurreriegel) looks askance at his son, and then suddenly Anna realizes what she’s recognizing; as Johnny’s eyes change, she shouts, “IT’S THE DEVIL!”