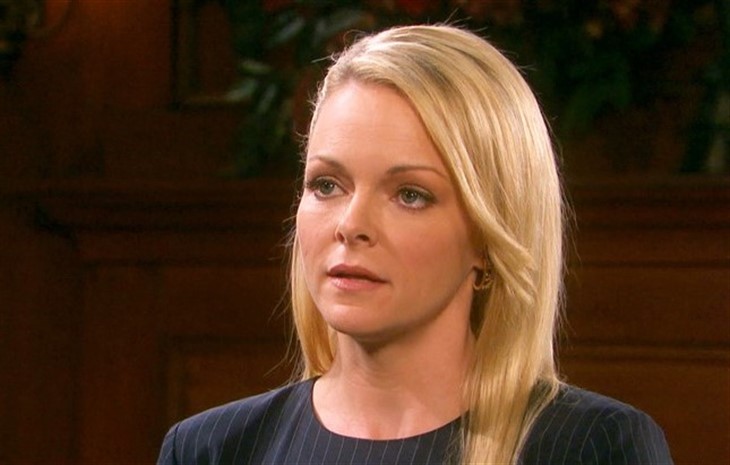 Days of Our Lives spoilers for the week of January 10 reveal that EJ DiMera’s (Dan Feuerriegel) trial begins. Sami DiMera (Alison Sweeney) and Lucas Horton (Bryan Dattilo) have already left Salem by then. However, Lucas returns to testify against EJ. Lucas has told a lot of lies, which means he will likely mess up while being questioned by Belle Brady (Martha Madison).

DOOL spoilers reveal that the prosecution moves forward with Sami’s kidnapping case. The guard was going to expose Lucas. However, Lucas managed to get him to name EJ as his boss instead. Then, Lucas sealed the deal by planting evidence showing EJ paid the guard from DiMera Enterprises’ bank account. Not only did EJ lose his job as co-CEO, but it makes it more difficult for EJ to prove his innocence.

During the week of January 10, EJ’s trial begins. Belle agrees to represent him but she has her work cut out for her. Even though it won’t be an easy case, Belle is up for the challenge and believes in EJ’s innocence.

Lucas and Sami leave Salem together during the week of January 3. It isn’t known if Sami will return for the trial. However, it is confirmed that Lucas testifies on January 14. Lucas will likely be asked questions about how he saved Sami. Lucas might also discuss his affair with Sami, since it’s believed EJ’s anger is what prompted the kidnapping.

Days of Our Lives spoilers reveal that EJ has been thinking about who could be framing him. At one point, he thought it was Rafe Hernandez (Galen Gering). However, he later realized that it was probably Lucas. Even though nobody believes Lucas would do something like that, viewers know the truth.

Since it’s going to be too difficult to clear EJ with all the evidence, Belle’s strategy might be to trip up Lucas during the cross-examination. Lucas has never been a very good liar and he might have trouble remembering all of his lies. Since Belle is so detail-oriented, she will immediately notice even the tiniest discrepancy.

Head writer Ron Carlivati implied to Soap Opera Digest that there could be a bombshell at EJ’s trial. With Belle grilling Lucas on the witness stand, she will probably get to the truth. All she has to do is keep calling out everything that doesn’t quite add up during Lucas’ testimony. Eventually, she will trip him up and he could finally just blurt out the truth.

That certainly would cause the courtroom to erupt in chaos. However, it is what would finally expose the truth. Once EJ is cleared, what are the consequences for Lucas? Will he end up in prison, go on the run, or will Kate Roberts (Lauren Koslow) save Lucas the same way she’s trying to save Philip Kiriakis (Jay Kenneth Johnson)?