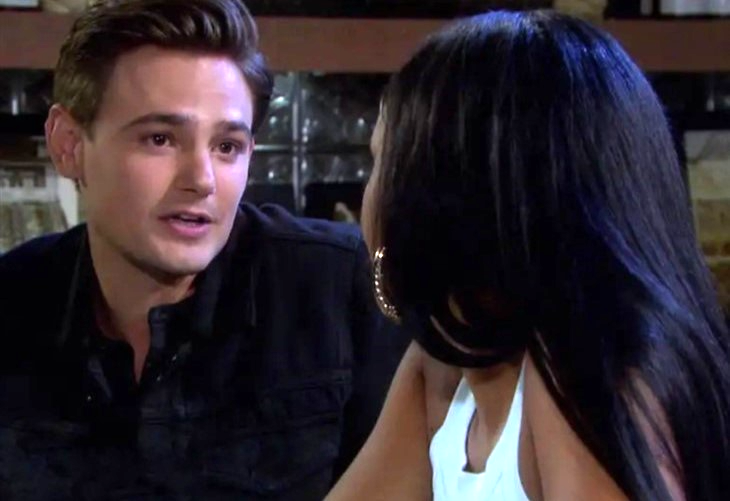 Days of Our Lives spoilers for the week of January 10 reveal that Chanel Dupree (Raven Bowens) gets her heart broken. Johnny DiMera aka “Jo-Devil” (Carson Boatman) probably dumps Chanel. A clue that the devil doesn’t have any use for Chanel was given on the Monday, January 3 episode. If Chanel gets too nosy or starts asking questions, she might get the boot.

DOOL spoilers reveal that the devil left Marlena Evans (Deidre Hall) only to jump into another Salemite. The person that the devil chose was Marlena’s grandson and the person who was going to make a movie based on “MarDevil.” However, nobody realizes that Johnny is possessed yet. The goal of “Jo-Devil” is the same… to get a baby.

The devil still might go after Ben Weston (Robert Scott Wilson) and Ciara Brady Weston’s (Victoria Konefal) child. Everyone thinks the devil is gone, so nobody would suspect Johnny. Of course, there is always the possibility that the devil will pick someone else to carry the child, too.

Chanel isn’t the type of person that will just accept Johnny’s vague excuses or answers to her questions. A lot of viewers don’t care for Chanel and she did cause trouble in the past. However, she also seems to have pretty good intuition. So, she might suspect pretty quickly that Johnny isn’t himself. If Chanel asks too many questions, gets too demanding, or wants too much lovey-dovey time with Johnny, she could get kicked to the curb.

Days of Our Lives spoilers reveal that Johnny and Allie Horton (Lindsay Arnold) are twins. Many multiples have “twin radar.” In fact, the soap mentioned Eric Brady (Greg Vaughan) and Sami DiMera’s (Alison Sweeney) “twin radar” when they were much younger. So, there is that history that head writer Ron Carlivati might use.

It just might be Allie’s “twin radar” that senses Johnny is literally not himself. Even if Johnny laughs at Allie’s suspicions, she might try to warn Chanel. Unfortunately, Chanel won’t listen to Allie. She is too much in love with Johnny, even if something doesn’t feel right.

During the week of January 10, it is stated that Johnny leaves Chanel heartbroken. In the 2020 preview, Carlivati told Soap Opera Digest that Johnny and Chanel would go in two different directions. While the real Johnny might never have broken Chanel’s heart, “Jo-Devil” wouldn’t think twice about it. With nobody to ask questions, follow him around, or interrupt him, the devil will have an easier time creating misery in Salem.