Days Of Our Lives Spoilers: Johnny DiDevil Bedevils Ava By Turning Himself Into A Human Sized Duke The Bear 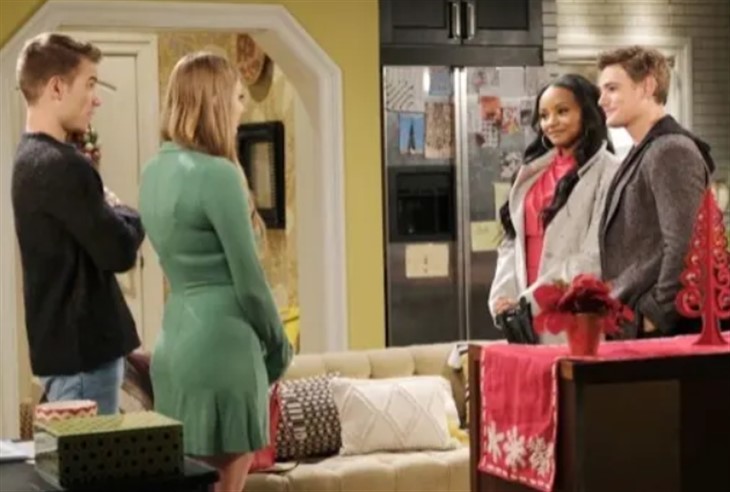 Days of Our Lives (DOOL) spoilers and rumors tease that Johnny DiMera (Carson Boatman) who is now Johnny DiDevil will bedevil Ava Vitali (Tamara Braun) by turning himself into a human sized Duke the Bear in upcoming episodes of Days of Our Lives!

The Days Of Our Lives Spoilers – The Devil Knows All

Days of Our Lives viewers know from seeing the devil in Marlena Evans (Deidre Hall) and how he operated in her, that the devil knows all – and tells all if it will benefit the devil! Days of Our Lives viewers will remember how MarDevil conned Paulina Price (Jackée Harry) into telling her the family secret! Then he destroyed lives and family relationships by conning Chanel Dupree (Raven Bowens) into telling it publicly at Paulina’s wedding to Abe Carver (James Reynolds)! The devil is all about lying, killing and destroying relationships and people, and also about accusations and guilt trips if it serves his purpose! Johnny DiDevil knows all about Ava’s secrets and that he can use her in his plots and plans, and will seek to control her through her guilty conscience!

Days of Our Lives viewers will recall that Ava has several secrets right now – one secret involves herself and Gwen Rizchech (Emily O’Brien) being blackmailed by Kristen DiMera (Stacy Haiduk) to help her escape and go on the run. Now, Days of Our Lives viewers know that Ava has been involved with some pretty dark and evil people in her past, and called out a few mob hits as well. But the devil will come to torment Ava a second time when he controls her with the secret involving her cutting the head off of Duke the Bear! It will be the second time the devil has come after Ava – viewers will recall that MarDevil raised Charlie Dale (Mike C. Manning) from the dead at Halloween to torment Ava! This time Johnny DiDevil will torment her and seek to control her by turning himself into a giant version of Duke the Bear!

The Days Of Our Lives Spoilers – Johnny DiDevil Torments Ava Vitali Over Murdering An Innocent Bear!

Days of Our Lives viewers will recall that Duke the Bear was only a stuffed animal – yet Ava cut his head off and left him on Nicole Walker’s (Arianne Zucker) as a sick form of revenge! Hell hath no fury as a woman scorned, and scorned didn’t begin to describe Ava after finding out that her lover, Rafe Hernandez (Galen Gering) betrayed her by having sex with her best friend Nicole on the Basic Black conference table! Days of Our Lives viewers know that Duke represented Nicole’s relationship with Rafe to Ava and that was a symbolic gesture but also a warning of what she really wanted to do – cut their heads off! The devil knows all this and Johnny DiDevil turns himself into a giant economy sized Duke to torment and control Ava over “murdering” an innocent little stuffed bear! Apparently, bears grow much bigger as ghosts!

Days of Our Lives viewers will remember the last time the devil tormented Ava, she cried for help – and her other son, Tripp Johnson (Lucas Adams) thought it was after effects from the drugs Charlie had dosed her with. Days of Our Lives viewers saw Tripp find out drugs had nothing to do with it when Charlie came to torment him and Allie Horton (Lindsay Arnold) and more recently turn him into Jan Spears (Heather Lindell) in a coma! Again, Ava herself will wonder if she’s tripping when she’s tormented by the giant ghost of Duke the Bear!

GH Spoilers: Will Jordan Ashford Return To PC In The Near Future!