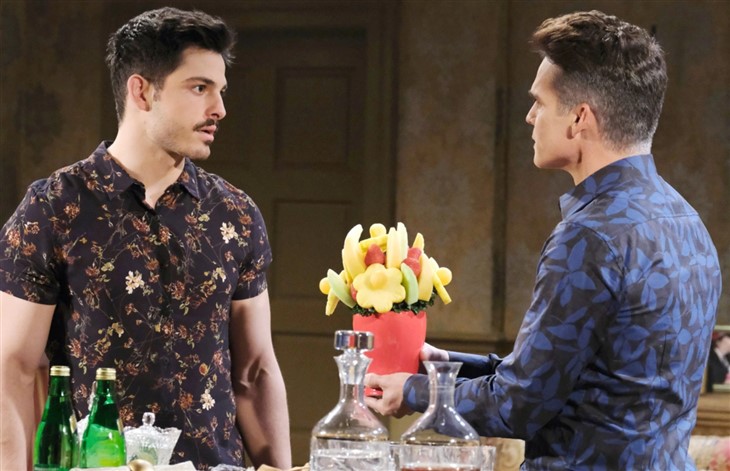 Days of Our Lives spoilers tease that Sonny Kiriakis (Zach Tinker) is still in the hospital recovering from being stabbed in the back. Meanwhile, Leo Stark has been framed for not only the attack on Sonny but the murder of Abigail DiMera (Marci Miller). But once the real killer is revealed and Sonny is released from the hospital, what comes next for this duo? Could they possibly find romance after all they have been through together?

Days Of Our Lives Spoilers – Sonny Kiriakis And Leo Stark Were Once Involved.

Years ago, Sonny and Leo met through a dating app. What Sonny didn’t know was that Vivian Alamaine (Linda Dano) hired Leo to not only romance Sonny, but to betray him. Worming his way into a job at Titan Industries, Leo eventually tried to sue Sonny for sexual harassment. It was all a setup and the lawsuit was eventually dropped. But Sonny and Leo were certainly done as a couple, seemingly forever. Sonny then went on to marry Will Horton (Chandler Massey) and the couple moved to Arizona!

Sonny eventually moved back to Salem and Will had intended to join him but he received a job offer in Hollywood. Will took the job and Sonny and Will have been living separately ever since. Will comes back as often as he can, but the longer he is gone the more Sonny will start to question their relationship. Leo’s presence will only serve to complicate matters.

Days Of Our Lives Spoilers – Could Sonny Kiriakis Once Again Fall For Leo Stark?

Leo may have learned a valuable lesson after being framed for Abigail’s murder. Leo will never be completely on the up and up but he will certainly try to be a better person. Sonny will take note of Leo’s changes and it could change the way he looks at Leo. They can’t go back in time, but it may be possible for Leo and Sonny to rekindle their romance. This is especially true the longer Will stays away. Sonny is certainly lonely, and dealing with his duplicitous brother Alex Kiriakis (Robert Scott Wilson) will cause an even greater strain on Sonny, who may very well turn to Leo for comfort.

Could Leo and Sonny actually find romance again? Will Sonny get tired of being away from Will? Should Will return to Salem before he loses Sonny forever? Anything can happen in Salem so stay tuned to Days of Our Lives streaming every weekday on Peacock. And don’t forget to check back right here regularly for all your Days of Our Lives news, information, and spoilers!