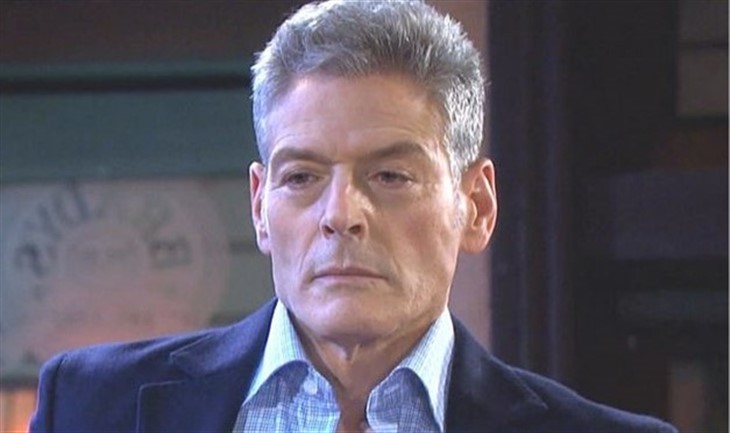 Days of Our Lives spoilers and rumors tease that considering Kayla Johnson’s (Mary Beth Evans) dire condition and Craig Wesley’s (Kevin Spirtas) sudden reappearance in Salem, the two may be linked. Craig may have showed up to try and take Kayla’s Chief of Staff position away from her again.

Days Of Our Lives Spoilers – Kayla Johnson May Not Live

Kayla may not live barring a miracle, and it’s the same for Dr. Marlena Evans (Deidre Hall) and Kate Roberts (Lauren Koslow). There has been no cure found for the deadly serum that Orpheus (George Del Hoyo) stole from Dr. Wilhelm Rolf’s (Richard Wharton) secret lab although he’s working on it. It’s possible that Craig’s old friend who contacted him from Salem University Hospital the last time he snatched Kayla’s job called him and he came.

After all, Craig had quit his job in New York City to come to Salem because of Leo Stark (Greg Rikaart) and his former hospital may not have taken him back. He may be claiming he came feeling guilty about Leo’s legal troubles but he showed up before Leo was re-arrested, and Salem University Hospital may need him.

Craig has experience in two specialties, one as a heart surgeon and the other as a bacteriologist. While it’s possible that he could have come as a consultant on Kayla, Marlena and Kate’s case, it’s doubtful that the serum has a bacterial base. Besides, Rex Brady (Kyle Lowder) is coming to Salem, assuredly because Kate and Roman Brady (Josh Taylor) are his parents but also because he studied under Dr. Rolf. It’s more likely that Craig is back knowing that Salem University Hospital may need a new Chief of Staff on very short notice, and he was tipped off. That way he can step right back into the job if Kayla cannot be saved.

Days Of Our Lives Spoilers – Why Else Would He Randomly Return?

Why else would Craig randomly return without any apparent reason to do so? Of course, there’s that theory of Leo’s that Craig hung around town and committed a couple of crimes. Leo is accusing him of killing Abigail DiMera (Marci Miller) with a steak knife Leo had, then stabbing Sonny Kiriakis (Zach Tinker) with the same knife and framing him. Plus he left Leo’s revenge list at Sonny’s stabbing, and stayed around to watch the fallout?

If he’s not there to take Kayla’s job should she die, barring a miracle, then he doesn’t have much of a cover, does he? On the other hand, maybe that is why he’s there and the rest of it is just a coincidence.