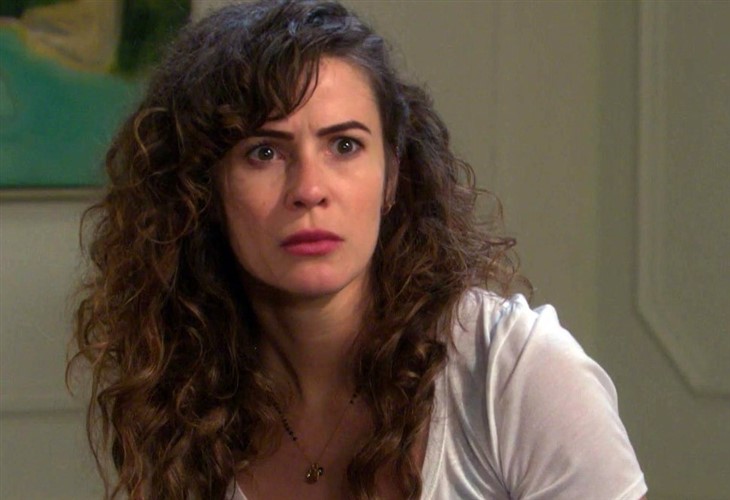 Days of Our Lives (DOOL) spoilers and updates tease that there will be a last minute save for Sarah Horton (Linsey Godfrey) in an upcoming episode of DOOL.

Previous DOOL episodes revealed that Xander Cook (Paul Telfer) managed to find the real antidote that Gwen Rizchech (Emily O’Brien) had hidden in their hotel suite.  Xander had urged Maggie Kiriakis (Suzanne Rogers) to use the antidote on Sarah, but she was afraid it would cause more damage to her brain, not trusting the duplicitous Gwen. But then, as Xander and Maggie are visiting Sarah, who still thinks she’s a toddler, she enters a catatonic like state!

Dr. Kayla Johnson, (Mary Beth Evans) who is back at work after the exit of Craig Wesley (Kevin Spirtas) runs brain scans and finds Sarah’s condition is deteriorating further.  Xander is devastated, and Maggie even more so – but he convinces Maggie to try the antidote, since they have nothing left to lose.

DOOL Spoilers – Maggie Kiriakis Agrees To Give The Antidote A Try

Kayla is still there when Xander suggests trying the antidote and she agrees it’s worth a try, it cannot make things any worse. If Sarah continues on the path that she is currently she will die anyway, and Maggie doesn’t know if she can stand losing another daughter! Of course, more tests will be run afterwards regardless so if they are trying an untested antidote, the best place to do so is in the hospital! So, with Kayla standing by, and Sarah continuing to be hooked up to monitors, the antidote is administered, the still childlike Sarah howling at the pain of the needle. Then Maggie and Xander wait while the antidote gets into Sarah’s system and hope that it will have the desired effects.

It is expected that Sarah may be unconscious for a while after the antidote is given, so Xander and Maggie try not to worry – her monitors still showing she’s stable. Finally, she wakes up and she calls Xander by name, and starts asking all kinds of questions about why she’s in the hospital and what is going on! Xander and Maggie are thrilled, thinking that for the most part they have Sarah back at least to the point of when she was abducted.

Xander will be shocked when Sarah has a shocking request that shows she is further back in the timeline than he and Maggie would have preferred. This may be a time in her life that they don’t want to have to catch her up on because of the trauma she endured. They certainly don’t want Sarah to have to relive and remember when she found out her baby was dead and Kristen DiMera’s (Stacy Haiduk) lived! Xander was in on that baby switch in the nursery along with Victor Kiriakis (John Aniston) and Mackenzie Horton was really Rachel Black (Finley Rose Slater) who is now five! Xander and Maggie will have a daunting and heartbreaking task ahead of them trying to explain Mackenzie died shortly after birth!