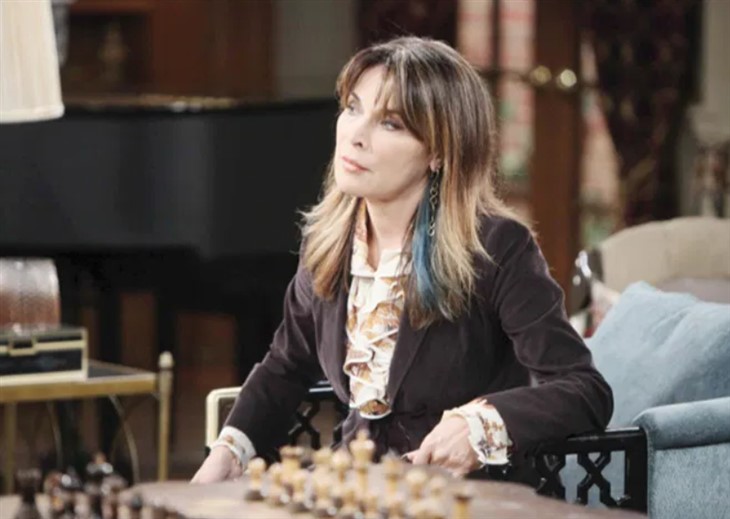 Days of Our Lives (DOOL) spoilers tease that Kristin DiMera (Stacey Haiduk) has a consistent method when dealing with her enemies. She comes up with a fake mask of the person in question and convinces their loved ones that they are leaving town. Then she spirits the person away to one of the DiMera islands. That’s exactly what happened to Sarah Horton (Linsey Godfrey) and now it’s about to happen again. This time the victim is supposed to be Kate Roberts (Lauren Koslow).

Somehow, Kristen was able to pull off her impersonation of Kate and convinced Jake DiMera (Brandon Barash) that she was breaking up with him. The real Kate is currently imprisoned in the tunnels underneath the DiMera Mansion. Although Jake is suspicious, he hasn’t yet even considered the possibility that isn’t wasn’t really Kate who broke up with him. But he should have lingering doubts, and may just rescue the real Kate before Kristen has a chance to send Kate to the island. And once she is rescued, Kate will realize that what happened to her sounds a lot like what happened with Sarah.

DOOL Spoilers – All of Salem currently Believes That Sarah Horton Ran Off With Rex Brady!

Kate will likely realize that Sarah may have also fallen victim to Kristin. Everyone believes that Sarah left town on her wedding day to Xander Kiriakis (Paul Tefler) because she suddenly wanted to be with Kate’s son, Rex Brady (Kyle Lowder). A quick phone call to Rex will confirm Kate’s suspicions. While she’s not a fan of Sarah’s, Kate will still be horrified that someone else suffered the same fate that almost happened to her! But the location of the island in question isn’t known to many, even to most of the DiMera family. So look for Kate to contact the one person who might know where to locate the island and bring Sarah home.

Days Of Our Lives Spoilers – EJ Dimera Might Be The Only Person Who Can Find Sarah Horton!

As viewers know, EJ DiMera (last played by James Scott) has been away from Salem for many years now. At first, he was believed to have died. He was eventually found by his wife Sami Brady (Allison Sweeney) but was severely burned in the process. He’s been out of the country ever since, recovering from his injuries. Sami herself has returned to Salem much time, but EJ has yet to make an appearance, even now with Sami’s extended stay in Salem. But when Kate calls him, he will be ready to return to the land of the living. He will likely know exactly where Kristen would have taken Sarah so that will be his first stop. But will she find her and what condition will she be in?

Will Kate be taken to the DiMera island or will she be rescued? Will she suspect that she isn’t the only one that Kristen has targeted? Will Kate ask to check and see if he can find Sarah? Will Kristen finally be caught? The bad always end up making a fatal mistake in Salem, so stay tuned to Days of Our Lives, airing weekdays on NBC. And don’t forget to check back right here regularly for all your Days of Our Lives news, information, and spoilers!

Days Of Our Lives Spoilers: Kristen Turns To Marlena For Help, Makes Her Bargain For…