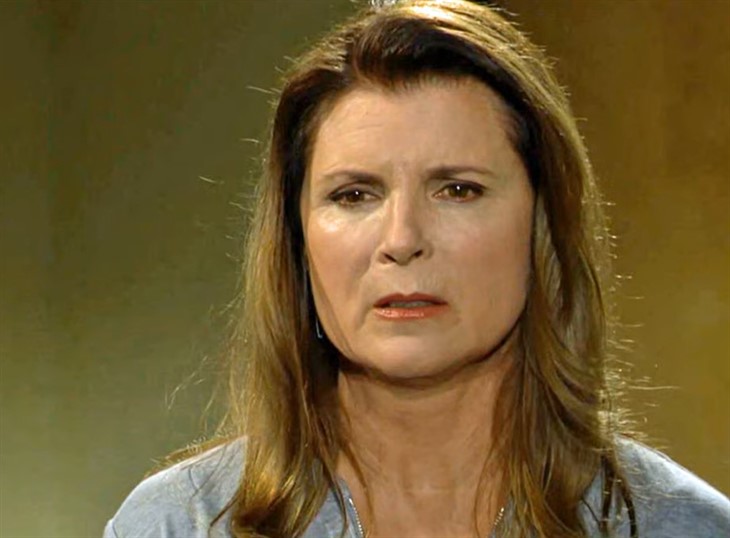 The Bold and the Beautiful (B&B) spoilers reveal that Steffy Forrester Finnegan (Jacqueline MacInnes Wood) remembers the shooting. Steffy puts a plan in motion with Ridge Forrester (Thorsten Kaye) and Taylor Hayes (Krista Allen). Actress Kimberlin Brown (Sheila Carter) is on contract so how will she stay on the show? Could John “Finn” Finnegan (Tanner Novlan) be alive?

The Bold And The Beautiful Spoilers – Steffy Forrester Finn’s Plan

B&B spoilers reveal that Steffy remembered that the shooter was none other than Sheila. Instead of calling the police right away, Steffy puts a plan into motion. Steffy doesn’t want Sheila to get away or have time to cover her tracks. Steffy also probably wants to make sure that Sheila isn’t able to get out of going to prison.

During the week of May 9, Steffy, Ridge, and Taylor will come up with their plan. Steffy calls Sheila and asks her to come over. Sheila thinks that Steffy might have changed her mind. Full of hope, Sheila rushes to Steffy’s house.

However, once Sheila arrives, she will be confronted about her actions. It is teased that Sheila’s facade comes tumbling down. It is also confirmed that Steffy and Sheila’s confrontation gets pretty volatile. What Sheila doesn’t know is that Steffy places a call to Deputy Chief Bradley Baker (Dan Martin), who is on standby.

The Bold And The Beautiful Spoilers – Sheila Carter Jailed

The Bold and the Beautiful spoilers reveal that characters get away with their crimes all the time. However, it’s hard to imagine Sheila not going to prison for life. After all, this wasn’t just assault. Sheila put Steffy into a coma and killed Finn.

It was recently confirmed that Brown is on contract. That doesn’t mean she will be on the show indefinitely. It’s possible that Brown’s contract is very short, just long enough to complete this storyline. However, it’s also possible that there will be a get-out-of-jail-free card.

There were also Li’s emotions during that hospital scene. Li didn’t seem devastated or even shocked. Instead, Li seemed full of rage and determination… as if she knew Sheila shot Finn. Then, there is the fact that Li didn’t ask for time with Hayes Forrester Finnegan (Piper Harriot). Li also hasn’t been by to see Steffy or ask if she remembers who killed Finn.

It sounds like Finn might actually be alive and Li is taking care of him. After Sheila’s confession is overheard by Baker, she will be arrested. Could Sheila be forced to face Finn during a shocking jailhouse confrontation?