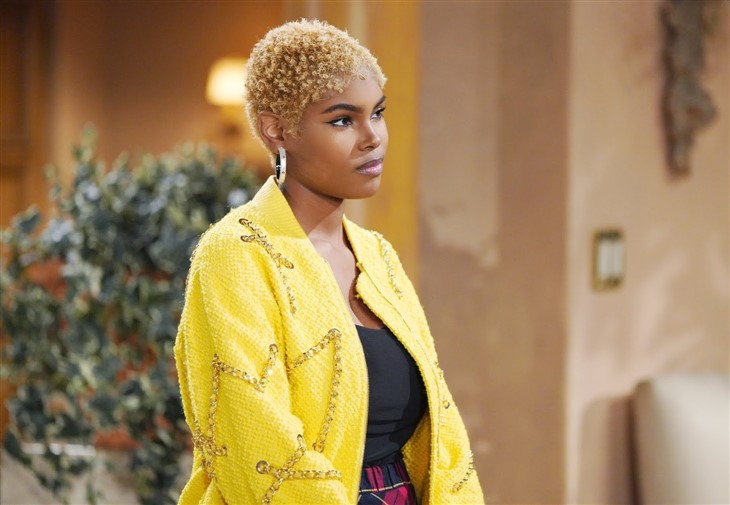 The Bold And The Beautiful (B&B) spoilers indicate that fans are getting very annoyed with Paris Buckingham (Diamond White) bouncing from man to man. Give the girl a man or let her go.

The Bold And The Beautiful’s Paris has been jumping around like her sister Zoe Buckingham (ex-Kiara Barnes). Paris came to town and hit it off with Zende Forrester (Delon De Metz). It looked like Zende and Paris were going to be a great couple but the writers began playing games. Paris was thrown into Thomas Forrester’s (Matthew Atkinson) orbit and began living with him. Suddenly Thomas is no longer interested and Paris is now hanging onto Carter Walton (Lawrence St. Vincent) for dear life. Paris needs to settle down with one man and stop playing the Forrester men against each other. Paris also knows that Carter is in hot water with the Forresters. Why would Paris continue to push for a relationship that she knows will hurt Carter in the end?

The Bold And The Beautiful’s Paris has been nothing but drama since she came to town. Some Bold fans have wanted her gone for months. Paris has been seen as a troublemaker by some people and we have enough of those. Paris seems to stir up trouble innocently but she is constantly a thorn in someone’s side. Paris believes in everyone else being honest but she does not believe in honesty for herself. Paris knows that Carter is jeopardizing his future but doesn’t seem to care.

The Bold And The Beautiful Spoilers – What Is Paris Buckingham’s’ Purpose?

The Bold And The Beautiful’s Paris doesn’t seem to have a purpose. Things started with the Forrester Foundation. Now Paris has turned everyone’s world upside down. Should Paris ride off into the sunset before she breaks Zende’s heart and costs Carter his job? If Paris isn’t ready to settle down should she break up with Zende and not date him at all? Does Carter need this added complication? Paris seems to be an unless character to a lot of fans. Should Paris simply fade into the sunset before her sister comes back to town? How would Zoe react to Paris and Carter’s attraction?

Zoe is not going to accept Paris with Carter at all. Paris and Zoe have had a rocky relationship for some time. What will Zoe do if she hears about Carter and Paris? Will Zoe come home to run Paris out of town?