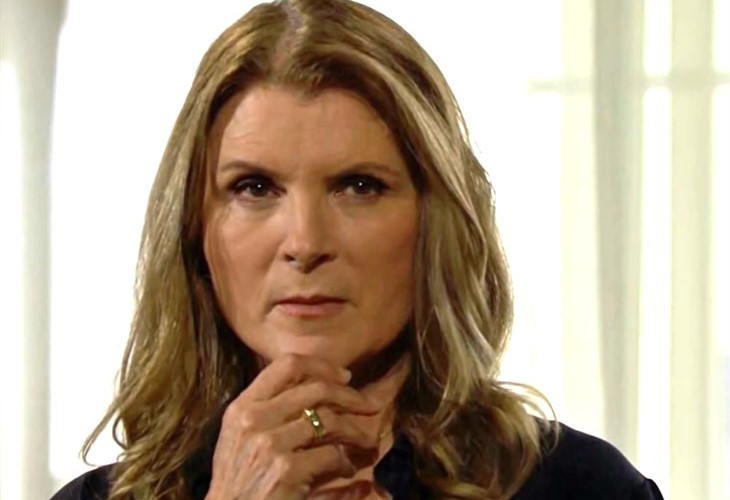 The Bold and the Beautiful (B&B) spoilers for the week of February 28 reveal that Sheila Carter (Kimberlin Brown) slips up when talking to Thomas Forrester (Matthew Atkinson). When Sheila blurts out a little too much information, what will Thomas do? Will he tell Ridge Forrester (Thorsten Kaye) the truth or keep it a secret so Taylor Hayes (Krista Allen) can be happy?

The Bold And The Beautiful Spoilers – From ‘Bridge’ To ‘Tridge’

B&B spoilers reveal that Ridge decided that he had enough after Brooke Logan Forrester (Katherine Kelly Lang) defended Deacon Sharpe (Sean Kanan). While this was a victory for Deacon, it was heartbreaking for Brooke. When Ridge finally came home, Brooke thought that they could finally work things out. However, she was devastated when Ridge said it was over.

Ridge immediately went from Brooke to Taylor. Even though Taylor was hesitant and worried she could get hurt, “Tridge” is officially back together.

During the week of February 28, Thomas and Sheila get into an argument. Despite Sheila insisting she’s a changed woman, Thomas isn’t going to trust the villain. Thomas might also have issues with Sheila constantly showing up at Taylor’s office.

During the squabble, Sheila slips and blurts out a scandalous secret. This might be the beginning of Sheila’s scheme being exposed. However, it’s complicated due to who learns the truth.

The Bold And The Beautiful Spoilers – Thomas Forrester’s Moral Dilemma

The Bold and the Beautiful spoilers reveal that Sheila’s slip could be a real challenge for Thomas. Fans know that Thomas has always had issues with Brooke and loves that his parents are back together. At the same time, Thomas is trying to be a better man. This could prove to be a great challenge and test for Thomas.

It is suggested that Thomas might decide to do the right thing and tell Ridge the truth. When Ridge learns that Brooke only kissed Deacon because Sheila switched the champagne bottles, he will run to her. However, that same week, Deacon comforts Brooke. Could Ridge come rushing in to reunite only to find Brooke passionately kissing Deacon?

That certainly would be just like the soap. It just might send Ridge running back to Taylor all over again. As for Brooke, she will be even more devastated that her one chance is ruined by her loose lips. What does this mean for Ridge, Brooke, Taylor and Deacon’s future? Could this really be the end of “Bridge” and the beginning of “Beacon?” We will have to keep watching the CBS soap to find out.