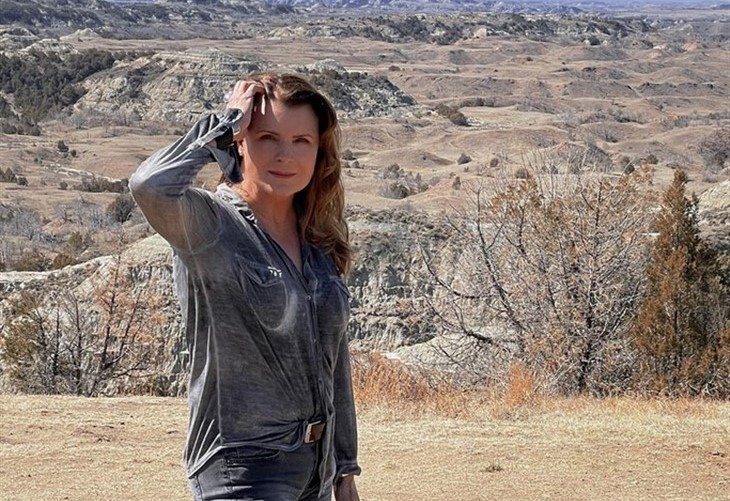 The Bold and the Beautiful spoilers document that Kimberlin Brown (Sheila Carter) appeared on B&B’s YouTube episode of Bold Live on April 8. She had been posting a series of vacation photos starting on April 1.

Brown advised during her live appearance on the YouTube show that B&B’s super Supervising Producer, Casey Kasprzyk hosts, that she was still on vacation that began when she traveled cross-country to pick up a boat in Minnesota.

Soap fans know that B&B records scenes approximately one month in advance of completed episodes airing. That implies that the Sheila drama could be resolved sometime in May.

The Bold And The Beautiful Spoilers – Soap Math Is Not Exact

Of course, advanced scenes and the advanced schedules that B&B operates on does not confirm an exact date when Sheila will be last seen on the show. Assuming that Brown worked through late March, it is possible that her character could be seen regularly through April and into May.

Viewers do not yet have enough information to know if Sheila will be revealed as John Finn Finnegan’s (Tanner Novlan) killer, Steffy Forrester Finnegan’s (Jacqueline MacInnes Wood) shooter, and Brooke Loan Forrester’s (Katherine Kelly Lang) alcohol provider in coming days. It could be a slow-drip reveal that plays out for months.

But if the stretched scenario is planned, then how does that connect with Brown being away from the set at the start of April?

Wood posted on her Instagram page the same day that Brown appeared on Bold Live. She was still carrying her and her husband’s expected third child on that day.

An episode of her podcast, Good Risings, was also posted on April 8, with it being understood that the episode may have been recorded before that date.

Wood previously announced that she is due this spring. Her Instagram photos indicate that she is nearly ready to deliver.

Assuming that Wood has recently taken maternity leave, she will not be on set until the summer. Like Brown, she surely recorded advanced scenes that can allow Steffy and Sheila to appear in scenes (and appear together in scenes) through April and potentially into May.

The Bold And The Beautiful Spoilers – Looking Ahead On B&B

Working ahead can allow Wood’s main character to remain sporadically in the show, potentially until the actor returns to the set full-time. While Novlan’s time on B&B as Finn may be over, unless a twist revives that character or the actor returns as Finn’s twin, there is no news suggesting that Wood is leaving B&B.

Brown has been on and off B&B, in varied stretches, since first crossing over from The Young and the Restless in 1992. So, Sheila could escape Los Angeles, California, due to the gruesome circumstances she caused or be arrested and jailed for her crimes in LA.

Either outcome, among others, would signal a pause or end for Sheila. Of course, Steffy’s precarious situation could mean that Sheila survives, as she has been indestructible.