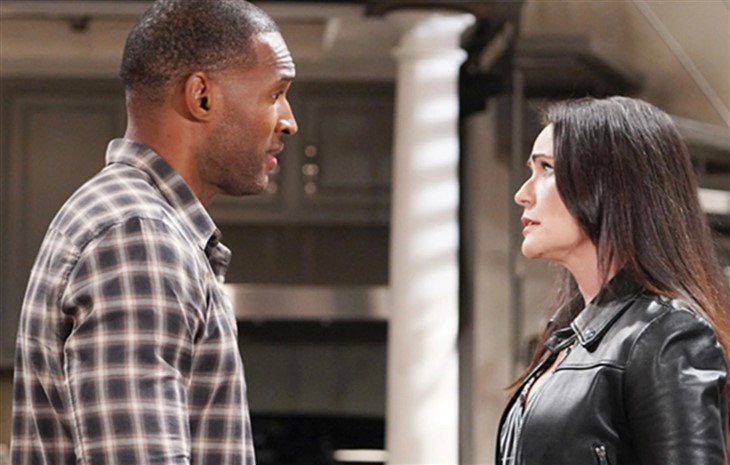 The Bold and the Beautiful spoilers reveal that Carter Walton (Lawrence Saint-Victor) and Quinn Forrester (Rena Sofer) might not be as done as everyone thought. It is teased that during the week of April 18, Carter and Quinn share an unexpected moment. Considering Carter pushed Paris Buckingham (Diamond White) away, could fans see a “Quarter” reboot?

The Bold And The Beautiful Spoilers – Quinn Forrester’s Decision

B&B spoilers reveal that Quinn and Carter’s affair was found out. Afterward, Eric Forrester (John McCook) came up with the horrifying idea of letting Quinn and Carter be intimate. The excuse of Eric having erectile dysfunction was given, but fans weren’t buying it.

Eventually, the agreement was canceled and “Queric” worked on their marriage. Meanwhile, Carter explored his options, which included Paris as well Katie Logan (Heather Tom).

Even though Paris gave Zende Forrester (Delon de Metz) permission to date around, the designer was only interested in the social worker. Zende gave Paris what she wanted and started to date a Forrester Creations model. While Zende was open about his actions, Paris kept her activities a secret. To this day, Zende still doesn’t know that Paris and Carter were secretly seeing each other.

Then, Grace Buckingham (Cassandra Creech) came to town and got involved in the situation. Grace ended up getting what she wanted, and Carter pushed Paris back to Zende. A photo in Soap Opera Digest shows Paris and Zende together at the hospital, which means Carter is by himself once again.

The Bold And The Beautiful Spoilers – Carter Walton’s Unexpected Moment

The Bold and the Beautiful spoilers reveal that during the week of April 18, Carter and Quinn will share an unexpected moment. It sounds as if the two might experience sparks flying again. Carter is lonely and really wants to be with someone. Even though so much drama happened when he was with Quinn, Carter might not be able to resist temptation.

Steffy Forrester Finnegan (Jacqueline MacInnes Wood) and John “Finn” Finnegan’s (Tanner Novlan) situation might play a part in getting “Quarter” back together. Finn lost his life, which was completely unexpected. Now Steffy lies in a coma, and nobody knows if she will ever wake up or even survive.

This might make Quinn and Carter think about how quickly loved ones can disappear. It could even make Carter and Quinn realize what – and who – is truly important in their lives. Will this lead to the two getting back together and if so, what kind of trouble will it cause with the Forrester family?