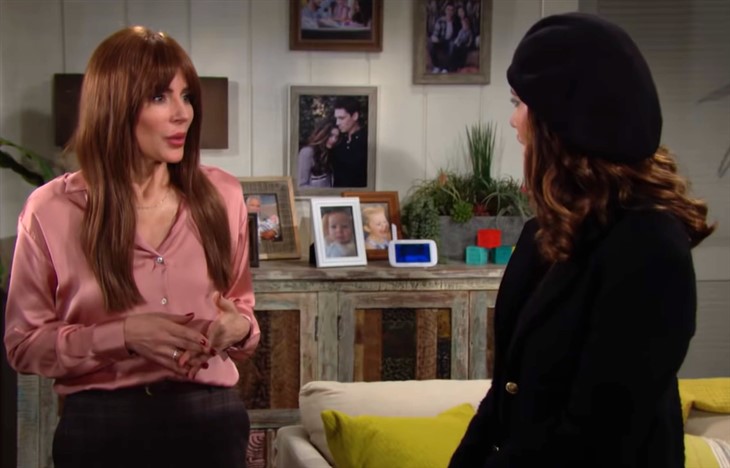 The Bold and the Beautiful spoilers reveal that Hope Logan Spencer (Annika Noelle) infuriates Steffy Forrester Finnegan (Jacqueline MacInnes Wood). After Hope’s warning, Steffy tells Taylor Hayes (Krista Allen) to get back the man she loves. However, Taylor refuses to go after Ridge Forrester (Thorsten Kaye) despite still being in love with him.

The Bold And The Beautiful Spoilers – Hope Logan Spencer’s Demand

B&B spoilers reveal that during the week of January 10, Hope will pay a visit to Steffy and Taylor. Hope has it in her head that the mother and daughter are interfering in Ridge Forrester (Thorsten Kaye) and Brooke Logan Forrester’s (Katherine Kelly Lang) marriage. Of course, that is not what’s happening.

Although Steffy believes that Brooke’s relapse might have been triggered by Taylor’s return, it was all due to Sheila Carter’s (Kimberlin Brown) revenge plot. Steffy and Thomas Forrester (Matthew Atkinson) tell Ridge their theory, so maybe this is where Hope gets the idea. In any case, Hope demands that Taylor and Steffy knock it off.

Steffy is furious that Hope has the audacity to accuse them of interfering in Brooke’s marriage. Steffy thinks that Hope interfered first by forcing everyone to accept Deacon Sharpe (Sean Kanan) into the family.

After Hope’s demand, Steffy tells her mother to go after the man she desires. Steffy knows that Taylor is still in love with Ridge. Steffy also feels that Taylor makes Ridge happy while Brooke just brings heartache.

The Bold And The Beautiful Spoilers – Steffy Forrester Finnegan Shut Down

The Bold and the Beautiful spoilers reveal that Wood spoke to Soap Opera Digest about the scene. Even though Taylor is in love with Ridge, she refuses to go after him. Taylor feels that it would be disrespectful to go after a married man. Taylor cares about Ridge and wants to see him happy, but she also knows that he is trying to make his relationship with Brooke work.

“… Taylor tells her she’s not interested in breaking up Brooke and Ridge, and that she only wants Ridge’s happiness, even if that is with Brooke…”

Steffy accepts Taylor’s answer, but doesn’t think that is the end of it. Steffy replies that she will support her mom when she’s ready to get back together with Ridge. Afterward, Steffy and Thomas talk to Ridge. They let their dad know their theory about Deacon somehow being involved with Ridge and Brooke’s relationship problems.

“They are tired of all the heartache Brooke causes everywhere she goes – and seemingly is always the victim!”

“Let Deacon have her! Taylor belongs with Ridge!”