B&B Spoilers: Hope Is Devastated As She Blames Herself For Her Mother’s Relapse 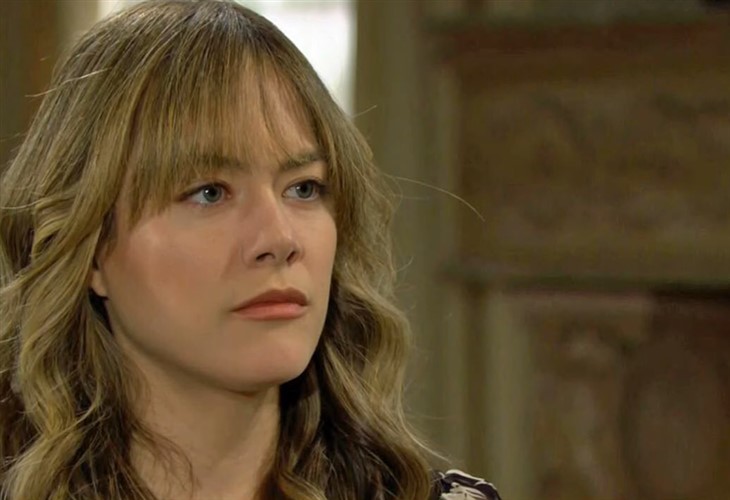 The Bold And The Beautiful Spoilers – Did Hope Spencer Put Too Much Stress On Mom?

Viewers of The Bold and The Beautiful will remember that Brooke and Ridge Forrester (Katherine Kelly Lang, Thorsten Kaye) have been going through a very rough patch since Hope revealed she wanted her birth father in her life! Ridge has never trusted Deacon Sharpe (Sean Kanan) and never will, and always has and will consider him a threat to Brooke and to Hope as well, and made that quite clear! Viewers of The Bold and The Beautiful will recall that Ridge didn’t take it well at all when he found out his stepdaughter had been writing to the felon the whole time he was in prison! Ridge took it even less well when Brooke took up for Hope, saying she is a grown woman and has the right to make her own decisions concerning her birth father! Now Hope wonders, considering Ridge’s reactions and the rift that is widening between him and Brooke, if she put too much stress on her mother by wanting Deacon in her life and Brooke accepting it.

Viewers of The Bold and The Beautiful will recall that Brooke was devastated and frightened when she woke up New Year’s Day with Deacon in her bed and a horrid hangover headache! Brooke didn’t have total recall of what had happened, although Deacon constantly reassured her they didn’t have drunken sex, he was on top of the sheets and had tucked her in and must have dozed off. Speaking of sheets, Deacon was also three sheets to the wind but obviously not as drunk as Brooke was – she was already beyond tipsy the night before when he had returned to her house to retrieve his forgotten cell phone! Viewers of The Bold and The Beautiful will recall that Deacon also blamed himself for drinking with Brooke, although he had tried to stop her at the point of the vodka shots but she wouldn’t.

Viewers of The Bold and The Beautiful will see Hope finding out Brooke fell off the wagon along with Ridge, as a guilty and devastated Brooke breaks the news to them together. Hope knew something must have happened to make Brooke so angry at Deacon that she told him to leave and never come back, although he didn’t reveal everything that took place that night. Viewers of The Bold and The Beautiful will see Liam Spencer (Scott Clifton) try to comfort Hope and reassure her that her mother’s backsliding into booze had nothing to do with her. There is a lot that neither Hope, Liam, Ridge, Brooke and even Deacon don’t know about that night, although Deacon might have his suspicions about what really happened. After all, the first thing Deacon did when he got back to work at Il Giardino was to check one of the bottles of non-alcoholic champagne to see if there was a manufacturer’s problem – it was really a Sheila Carter (Kimberlin Brown) problem!