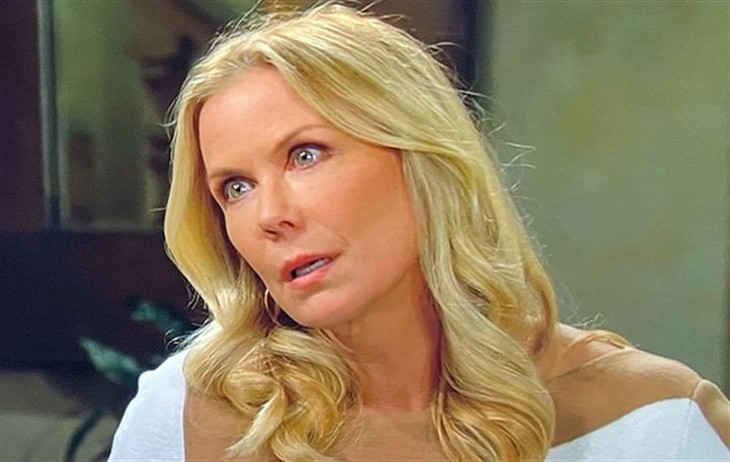 The Bold and the Beautiful (B&B) spoilers document that Brooke Logan Forrester (Katherine Kelly Lang) is confused. She can not determine how a bottle of non-alcoholic champagne caused her to want to drink vodka.

Nothing that happened with Deacon Sharpe (Sean Kanan) makes sense. That leads viewers to believe that Kanan’s character will become a scapegoat.

Brooke knows that she drank the same non-alcoholic bottle of champagne on Christmas Eve when Eric Forrester (John McCook) introduced her to the product. She liked the taste but felt no desire to seek the hard stuff. So, why would that be true with a second bottle?

The Bold And The Beautiful Spoilers – He Is Not Ridge Forrester

Ridge Forrester (Thorsten Kaye) hoped to make it home before the west coast clock struck midnight. He wanted to celebrate the arrival of 2022 with his eight-time wife. But travel plans went awry on the way back from the party the prince he was visiting held.

So, Ridge sent Brooke a text with a smooch emoji from inside his private jet the next morning. Her smartphone displayed the delivered message, but she could not see it as her device was downstairs.

Brooke woke up, began to orient herself, turned, and saw Deacon’s face, along with his cheeky sunshine greeting.

Deacon was wiped out after drinking with Brooke. But he was more clear-headed than she was. Deacon got Brooke into bed and collapsed beside her.

Ridge could have arrived at the house, gone upstairs, and discovered what would have looked like his worst nightmare in his bed. Deacon likely would have been given a beating in that instance.

Fisticuffs remain a good bet, as Ridge will likely explode when he learns of Deacon’s link to the night in question. Being already suspicious of this recently released man, Ridge will have every reason to punish his perceived rival for Brooke’s heart.

The Bold And The Beautiful Spoilers – Brooke Logan Forrester Decides She Was Wronged?

Brooke could be led to believe that Deacon plied her with liquor and then took advantage of the situation. Deacon’s plan might be tagged as him playing the gentlemen, in not going farther than the kiss, but intending to wreck Brooke’s marriage.

Deacon said too much to Brooke in the recent past, when telling her that she remained the one woman he has never gotten over. That conversation, backed by their history, could produce a guilty verdict.

Ridge will be unnerved, and Brooke will be desperate to preserve her marriage. That will leave Deacon vulnerable and in a very bad spot on B&B.