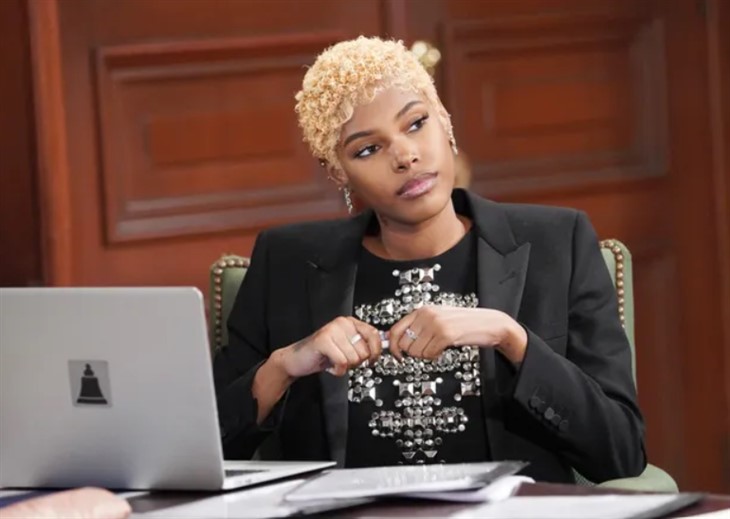 The Bold and the Beautiful spoilers document Paris Buckingham (Diamond White) recently made a serious decision. While her choice seemed wise, advice from her mother would be helpful at this time in the plot.

As readers of this comprehensive soap site know, daytime veteran Cassandra Creech (Dr. Grace Buckingham) is set to debut on January 10. The introduction of this new character continues to build out the Buckingham family backstory.

The Bold And The Beautiful Spoilers – Zoe Buckingham Started It All

Paris’ sister, Zoe Buckingham (Kiara Barnes), was the first member of this family to be seen in Los Angeles, California. She debuted in July 2018 and was followed by her father, Reese Buckingham (Wayne Brady), in the fall of that year.

Zoe was trailing Xander Avant (Adain Bradley) from England. She was able to briefly revive her romantic relationship with him. But bowing to Thomas Forrester’s (Matthew Atkinson) intimidation methods, during the time following Emma Barber’s (Nia Sioux) mysterious death, proved too much for Xander. He broke from Zoe and returned to Europe.

Reese had a short but notorious run in LA. He is the doctor who delivered Hope Spencer’s (Annika Noelle) healthy baby girl during a memorable babymoon effort gone terribly wrong.

He intentionally pronounced the baby dead to sell the child, Beth Spencer, also initially known as Phoebe Forrester (Madeline Valdez and River Davidson), to Taylor Hayes (then played by Hunter Tylo) under the guise of a private adoption. Flo Fulton (Katrina Bowden), her last name at the time, was Reese’s love interest at the time. She went along with the ruse, playing the birth mother.

Brady’s character was later arrested and is still in prison. Flo was jailed but was soon released as part of an agreement where she provided useful information to the authorities.

The Bold And The Beautiful Spoilers – Paris Buckingham’s Life Changes

Paris’ life in LA has advanced far beyond what she considered possible when arriving in November 2020 after graduating from college. White’s character began to fall for Zende Forrester Dominguez (Delon de Metz) but chose to preempt his recent engagement offer through Carter Walton’s (Lawrence Saint-Victor) texted assistance.

The youngest known member of the Buckingham family and Carter later shared a New Year’s Eve kiss. Devoted soap fans know that the insertion of the phrase, known member, was intentional as it could be possible that Grace or Reese has other children.

The new character that Creech will be playing creates new storyline options for Paris. Grace will hopefully become an integral part of the B&B scene as well.