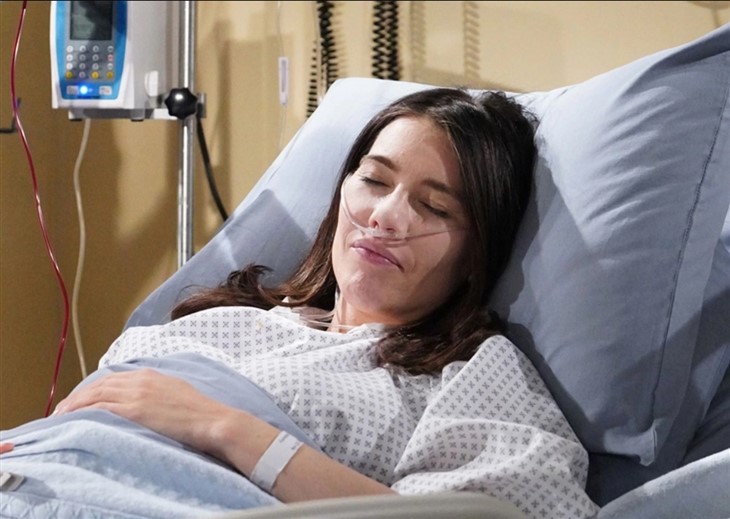 The Bold and the Beautiful (B&B) spoilers reveal that Steffy Forrester Finnegan’s (Jacqueline MacInnes Wood) exit might not be a coma. Even though Steffy is unconscious right now, Bridget Forrester (Ashley Jones) shares good news about the patient. Plus, Wood spoke about her storyline and said she is still filming and will continue to do so right up until she gives birth.

The Bold And The Beautiful Spoilers – Steffy Forrester Finnegan’s Shooting

B&B spoilers reveal that Steffy is in serious condition. Bridget told Steffy’s family that she was still very weak. Although Steffy is unconscious, it’s not clear if she is actually in a coma or not. That hasn’t been specifically stated. It seems Steffy is in a regular hospital room instead of an ICU unit. However, soaps have never been very good at mimicking real-life situations.

After Steffy was admitted to the hospital, it was believed that would be the last she would be seen for a while. Wood is pregnant and was expected to go on maternity leave. Wood hasn’t stated her due date and all fans know is that it’s sometime in spring 2022. It is estimated that Wood is about seven or eight months pregnant right now.

During the week of April 11, Bridget shares good news about Steffy’s condition with Liam Spencer (Scott Clifton). It almost sounds as if Steffy might wake up before Wood goes on maternity leave.

The Bold and the Beautiful spoilers reveal that Wood talked to Entertainment Tonight Canada about her pregnancy and storyline. Wood said that she is still filming new episodes and would continue practically until she gives birth.

“I’m basically filming, like, right up until I give birth.”

There would be no sense in Wood filming scenes lying motionless in a hospital bed for weeks on end. So, something must happen that nobody expects.

The actress also teased that the storyline is moving very quickly. Wood said to expect a lot of fun twists and turns.

“You got some fun storylines right now, so we’re diving into that right before my maternity leave. So, very, very exciting for the viewers, too… I have no idea how my storyline is going to go but… oh, my goodness, for the viewers, it’s just buckle up because there’s going to be a lot of twists and turns right now. Every day we are getting a new script, so things are moving very quickly so I have no clue but right now, we are in the thick of it.”

90 Day Fiance New Season – What We Know About Miona And Jibri?