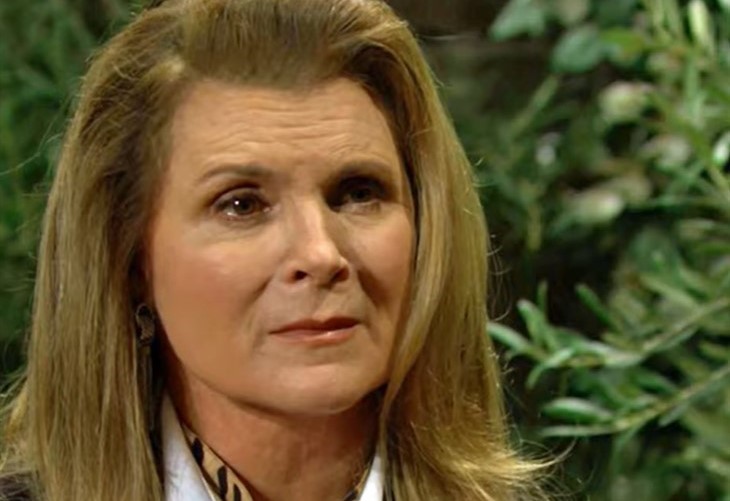 The Bold and the Beautiful spoilers reveal a guilty Sheila feeling cornered and like there’s no way out.

The Bold And The Beautiful Spoilers – Sheila Carter Is Suicidal

Killing two people — with one being her own son — is too much for Sheila Carter (Kimberlin Brown) to handle, but then she realizes Steffy Forrester (Jacqueline MacInnes Wood) is still alive and may one day wake and tell everyone that Sheila is the one who killed Finn (Tanner Novlan) and she can’t have that. The entire reason for shooting her in the first place was to keep her mouth shut.

Sheila contemplates finishing the job, but she knows that won’t be easy and she’ll still have to live with the guilt for killing two people. Thinking she’s going to go to jail while living with the guilt of killing her beloved son is too much for Sheila and she decides to end things for herself.

Taylor Hayes (Krista Allen) still has no idea that her BFF Sheila is unhinged and is the one who put her daughter in the hospital. She still wants to be a friend to Sheila and as comforting as possible with her. When she realizes that Sheila is on the hospital roof and ready to jump, she runs up there herself to stop her.

This often makes Taylor look as delusional as Sheila. As a psychiatrist, how can she not see what is going on here? She can’t tell that Sheila is acting crazier than ever, if that is at all possible. It feels almost as unrealistic as Deacon Sharpe (Sean Kanan) not realizing who would pull off such a heinous crime. He’s been around Sheila long enough of late to know what insane things she is capable of.

Well, Taylor climbs up to that roof — which is really CBS Television City in Hollywood doubling as the hospital roof — and uses all her persuasive power and professional skills to get Sheila to come down off that roof and not take her own life. How will Taylor feel when she learns this crazy woman is the one who put poor Steffy in that coma? Sheila is the reason her daughter might die and Taylor is bound to feel ill when she realizes she is the one who let her back into their lives. Stay tuned to The Bold and the Beautiful weekdays to see how this story plays out.