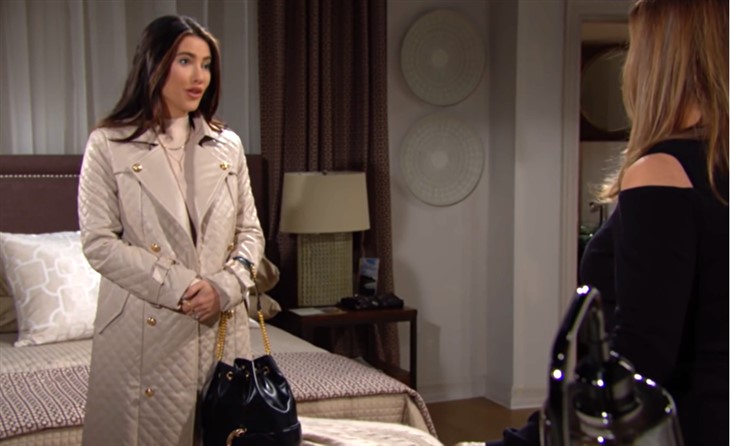 The Bold and the Beautiful (B&B) spoilers for Wednesday, December 7, 2022, reveal Steffy really starting to believe Finn’s theory that Sheila faked her own death.

The Bold And The Beautiful Spoilers – What Will Steffy Forrester And John ‘Finn’ Finnegan Do Now?

Why a forensic expert was not able to tell that Sheila Carter’s (Kimberlin Brown) toe was cut off cleanly and not chomped off by a bear is beyond us, but John ‘Finn’ Finnegan (Tanner Novlan) managed to figure it out with barely a glance. Something just looked off to him about that toe in a plastic baggie and he is more convinced than ever that his crazy mother is indeed alive.

Of course, this freaks Steffy Forrester Finnegan (Jacqueline MacInnes Wood) out completely, especially when they show up at Deacon Sharpe’s (Sean Kanan) door and see the panicked look on his face. Something is going on there and they bet it has something to do with Sheila. While Deacon might have been the one to find them and sort of save them after Sheila left them for dead, they know he is not very often on the up and up about anything. They also know how easily Sheila can manipulate.

After being rejected by both Brooke Logan (Katherine Kelly Lang) and Katie Logan (Heather Tom) numerous times over the past few years and weeks, Dollar Bill Spencer (Don Diamont) decides no more Mr. Nice Guy. It’s not getting him anywhere so he decides it’s time to return to being his true self and go rogue again. This can’t lead to anything good except really entertaining scenes.

To top off this new attitude in life, Bill once again dons his beloved sword necklace. Does this mean he will try to once again build a tower that stands above all the rest and call it Sky? After all, how tall your buildings are can be a metaphor for how big a man you are — at least in Bill’s world and even in the world of some real estate moguls.

Is this really the change that Bill needs or is he making a serious mistake that will end up costing him in the end? Stay tuned to The Bold and the Beautiful weekdays to see how these stories play out.