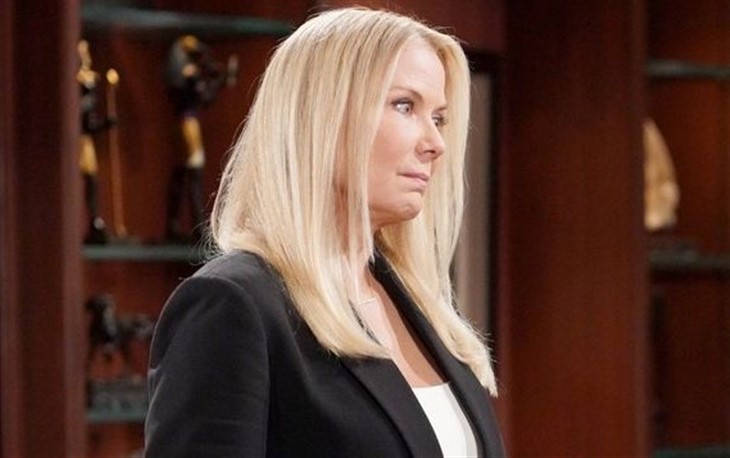 The Bold and the Beautiful spoilers document that Taylor Hayes (Krista Allen) told her daughter to respect Ridge Forrester’s (Thorsten Kaye) marriage. That happened during a get-together at the cliff house where Steffy Forrester Finnegan (Jacqueline MacInnes Wood) intercepted a call from her mother’s long-time rival.

Brooke Logan Forrester (Katherine Kelly Lang) was flabbergasted by the brazen disrespect Steffy showed for her and, for that matter, Ridge. As viewers saw and Thomas Forrester (Matthew Atkinson) witnessed, Steffy answered her father’s phone, unbeknownst to him, and told Brooke that Ridge was busy with Taylor and the Forrester family.

Ironically, Brooke’s next-day visit to the cliff house included her telling Taylor that Steffy needed to be brought under control. Brooke was outraged because Steffy’s antics pulled the soapy rug out from under the romantic setting that awaited Ridge back at the Logan mansion.

The Bold And The Beautiful Spoilers – Taylor Hayes A Step Ahead

Taylor, Ridge, and John Finn Finnegan (Tanner Novlan) were outside earshot when Steffy took the smartphone to the cliff house’s stairway. It was purposeful act, so that trio would not be aware that Brooke was calling.

While Taylor was unaware of Steffy shutting down Brooke’s intent to contact Ridge, she was present when Wood’s character continued her recent reconciliation push.

Steffy was told directly by her mother not to root for the end of Ridge’s marriage. Taylor saw that as Steffy behaving disrespectfully toward her father.

Of course, Ridge continues to allow himself to be positioned in the middle of Taylor, Steffy, and Thomas’ hopes for a Forrester family revival. His best way of shutting that down is not verbal responses but actions.

Ridge should decline any invitation to the cliff house where Brooke is not included if he truly is committed to her. He could also tell Taylor that it is best if she does not visit the offices at Forrester Creations to prevent awkward connections between herself and Brooke.

But Ridge has not been willing to take the steps noted above. He appears unwilling to hurt Taylor’s feelings by taking those types of stands.

Bill Spencer (Don Diamont) was having dinner with his sons at the infamous Il Giardino. That location is where two shootings took place and is currently the fugitive hideout for Sheila Carter (Kimberlin Brown). But other than those items, all else looks good on the menu.

So, Bill was telling his adult sons that Brooke will not give up on her marriage to Ridge. That comment is important because Brooke remains in control of this ballgame.

Brooke has no desire to yield to Taylor. So, unless Lang’s character really screws up, devoted B&B fans are likely expecting Ridge to maintain the status quo no matter what maneuvers Steffy and Thomas make in support of their mother.