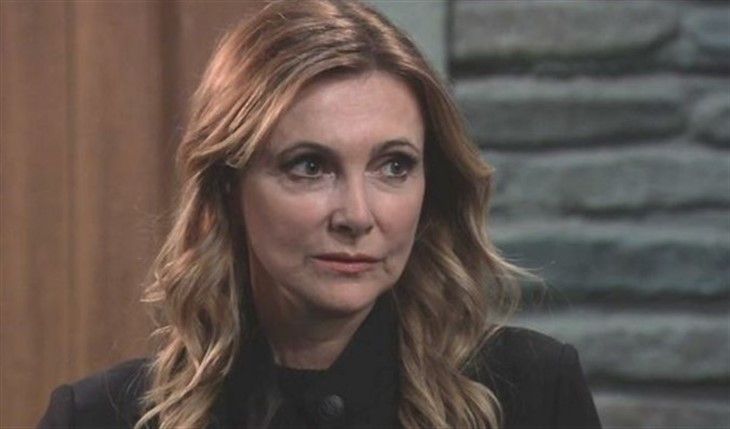 General Hospital (GH) spoilers and rumors tease that before she went on the run again from Port Charles, Holly Sutton (Emma Samms) served up some revenge on Victor Cassadine (Charles Shaughnessy). She enlisted Selina Wu (Lydia Look) in her plan, giving her one diamond from the Ice Princess and a potion-could Selina have spiked Victor’s drink with polonium 210?

Polonium 210 is the radioactive substance that infected Luke Spencer (Anthony Geary) through his earring thanks to Helena Cassadine (Constance Towers) and it also had infected Jerry Jacks (Sebastian Roche). It causes one to die a slow and painful death, losing one’s mind along the way; Luke and Jerry both eventually were cured, Luke finding an antidote. Luke and Jerry were both injected with the substance, Luke through his pierced earring and Jerry through a shot.

If polonium 210 is what Selina put in Victor’s drink, it will cause his brain and mind to be affected, and Victor will lose his power. Additionally, it may act quicker being ingested than by being injected-Victor’s lost control already, smashing his glass.

Polonium 210 is a known carcinogen, and it will affect Victor’s internal organs; when swallowed, it becomes concentrated in red blood cells. Then it spreads to the liver, kidneys, bone marrow, gastrointestinal tract, and the testicles, various body organs will be affected, including the bone marrow, and the cardiovascular and central nervous system.

The higher the dose, the faster the effect will be and if the central nervous system is affected, this is irreversible and leads to death. At high doses, this can lead to confusion, convulsion, and coma within minutes of the poisoning, but obviously Holly would want to avenge Luke by causing Victor the slow death. As polonium spreads around the body, it leaves a trail of reactive radicals, because it takes electrons from any molecule in its path.

The death of Luke wouldn’t be the only thing that Holly would want revenge on Victor for; there’s the murder of her sister Paloma Sutton (Emma Samms) before her eyes. There’s her own kidnapping and being forced to do Victor’s bidding, and the capture of her and Luke’s son, Ethan Lovett (Nathan Parsons). There may be other things that she was forced to do while under Victor’s control and subjugation, and being held against her will wasn’t fun either.

Above all, Victor must be controlled and taken down, and the effects of drinking however much of the radioactive substance will help control him. It will keep him from finding Holly while she seeks to free Ethan and avenge whoever else she needs to.