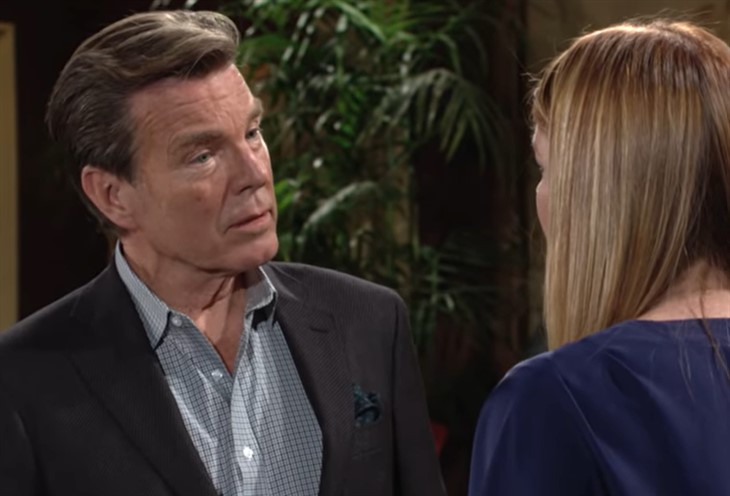 The Young and the Restless (Y&R) spoilers for Wednesday, December 7, 2022, reveal Jack definitely taking Diane’s side in her war with Phyllis.

The Young And The Restless Spoilers – Phyllis Summers Isn’t Scared

Jack Abbott (Peter Bergman) has been giving Phyllis Summers (Michelle Stafford) warnings for years, but none more so than the last six months as he’s reamed her out for all the trouble she has caused poor Diane Jenkins (Susan Walters). After Diane’s weepy sob story about spending the money that she stole from Jeremy Stark (James Hyde) to change her life, Jack feels more sympathy for Diane than ever. He also certainly believes how dangerous Jeremy can be.

This means it’s time for Jack to give Phyllis another angry talk-to about her immaturity and warn her that if bringing Jeremy to town harms anyone Jack loves, then Phyllis will pay the price. Phyllis just laughs it off because, in her mind, she did the right thing and Jack just has to see it one day. Who knows? Phyllis might even be right.

Meanwhile, Tucker McCall (Trevor St. John), the other man that Diane spent time with during her presumed dead years, has some more manipulations up his sleeve and reveals that he has a secret alliance that nobody saw coming. We could have guessed that Tucker’s changed man act was nothing but a ruse and even Devon Hamilton may not know just how underhanded his father really is.2

Just as Rory Gibson goes to recurring status as Noah Newman, his new romance with Allie Nguyen (Kelsey Wang) blows up worse than he could have ever imagined when Audra Charles (Zuleyka Silver) manages to seduce him. Talk about men being the weaker sex. Audra and Noah prove this easily. What does Audra really hold over Noah aside from being a pretty face from Europe that he just cannot forget?

How will Allie feel about all this when she learns what happened and will this new recurring status cause Noah to leave town with Audra? Perhaps Mommy Sharon Collins (Sharon Case) could give her son some counseling on how not to screw up his life again. Stay tuned to The Young and the Restless weekdays to see how these stories play out.