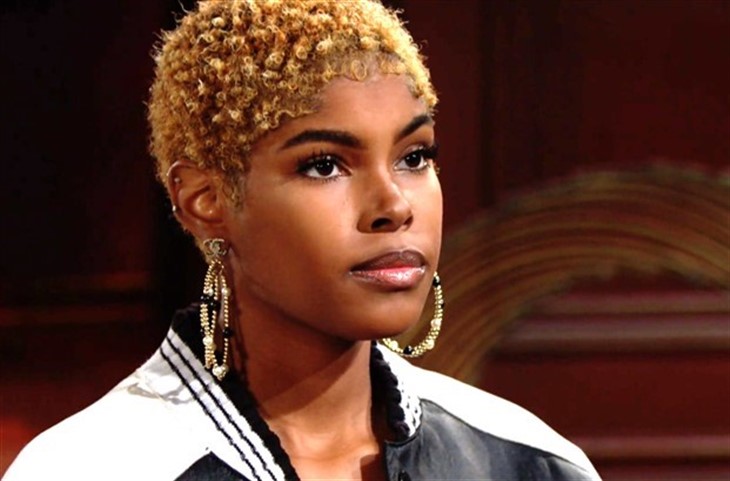 The Bold and the Beautiful (B&B) spoilers tease that Finn Finnegan (Tanner Novlan) may not be the only shock exit on the CBS soap. Our inside source at CBS hints that Paris Buckingham (Diamond White) could also be on the chopping block. Like Finn, Paris is not a legacy character nor has she been on for a relatively long time. The difference between the two is that Finn was beloved as a promised Lope/Steam buster, Paris’s storyline has gone nowhere. Soaps can’t afford to keep decorative actors.

The Bold And The Beautiful Spoilers – Is Paris Buckingham Out?

Our CBS insider warns that another stunning departure could be on the horizon and the chatter centers on Paris who is the sister of Zoe Buckingham (Kiara Barnes) and the daughter of deranged Dr. Reese Buckingham (Wayne Brady) and snoopy doctor Grace Buckingham (Cassandra Creech). Two of those kin are no longer on the show, and it doesn’t look good that Dr. Grace is not being called on to tend to the show’s two latest gunshot victims, that job goes to Bridget Forrester (Ashley Jones).

Jones was called back to the show as the doctor who will be front and center as the drama swirls around Finn and Steffy Forrester (Jacqueline MacInnes Wood) who were shot by Sheila Carter (Kimberlin Brown). Finn is dead, and Steffy will need to be tended to for a looooong time as the actress is out on maternity leave.

Instead of using a doctor already on the show to interact with the distraught families, they chose to bring back a legacy character and our source also hints that Bridget will be chem tested (again) with Deacon Sharpe (Sean Kanan).

The Bold And The Beautiful Spoilers – Is Paris Buckingham Out?

All of this goes a long way to bolstering the speculation that Paris has no meaningful story upcoming. Not that she ever has. This character was brought on as a “world savior” a social worker who was instantly elevated at a fashion company to do good deeds. All we see her do is bed Carter Walton (Lawrence Saint-Victor). And now that Taylor Hayes (Krista Allen) is back, so is the show’s favorite ‘saving the world’ character. Is our source correct, is Paris about to go back to where she came from?