B&B Spoilers: Monster Sheila Panics, Will She Be Arrested? 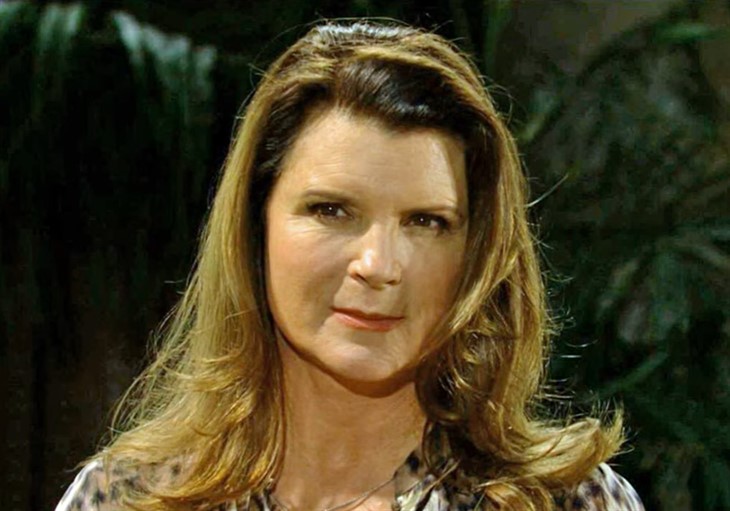 Sheila shot Finn as he jumped in front of Steffy Forrester Finnegan (Jacqueline Macinnes Wood) she, trained as a nurse, wouldn’t let Steffy call 911 nor would she render aid to Finn herself! Who does that – Sheila claimed she only wanted love and acceptance from Finn and to be a part of his life and her grandson’s, and now she appears to be more a part of his death!

The real Sheila has emerged, just as those who have known her for years feared she would – always with a sob story that she’s changed, that she wants to be loved and accepted, that she just wants a chance to prove it! Now she stands in the alley in back of Il Giardino with her son dying or possibly already dead, with a gun on his wife, and worried more about getting caught than about Finn’s life! Longtime viewers of The Bold and The Beautiful and sister soap, The Young and The Restless who remember Sheila from years back are not surprised!

It’s likely that the gunshot woke Deacon up; he manages to get the gun away from Sheila and xSteffy is able to call 911, but Sheila thinks she’s calling for her arrest! As Deacon holds onto the frantic and off the rails Sheila, keeping her from making a run for it, the ambulance arrives to take Steffy and Finn to the hospital; Finn appears to be barely clinging to life! Finn’s survival is now in the hands of his colleagues at University Hospital and God; Sheila’s is in the hands of Deacon, who’s very tempted to put them on her throat and squeeze!

The Bold And The Beautiful Spoilers – Sheila Carter Is More Worried About Her Freedom Than Her Son’s Survival!

Longtime viewers of The Bold and The Beautiful and The Young and The Restless will remember this is a woman who once murdered a man with a swarm of bees; Sheila found out the man was allergic to bee stings and locked him in a room with them!

Deacon knows Sheila from before she returned to Los Angeles but her obsession with retaining her freedom being more important than whether her son lives or dies is very telling! As viewers of The Bold and The Beautiful will agree, “Narcissistic Sociopath” doesn’t quite cut it; perhaps “Maniacal Murderess” might come close!

GH Spoilers: Does Brendan Byrne Have An Agenda Against The Cassadines?

Days Of Our Lives Spoilers: Chanel And Nicole Frantically Search For Allie