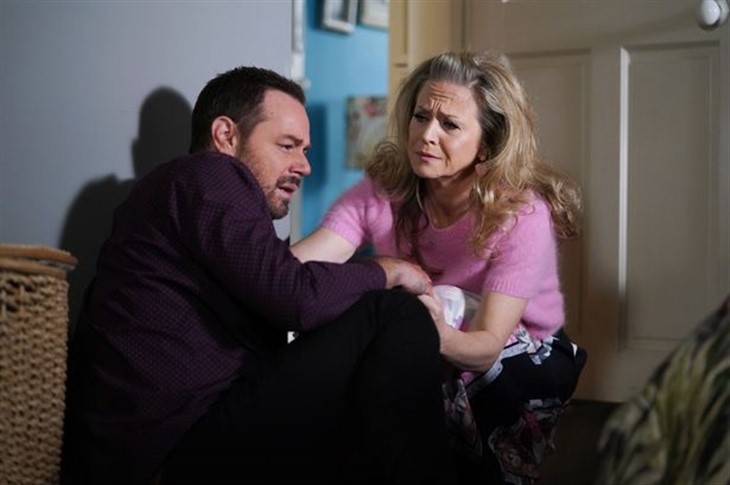 EastEnders spoilers and updates tease that Mick Carter (Danny Dyer) makes a shocking decision after the confrontation between Linda Carter (Kellie Bright) and Janine Butcher (Charlie Brooks). He’s all set to leave Linda for good for Janine. Is he making the right decision?

Fans know that Walford residents attended Tina Carter’s (Luisa Bradshaw-White) funeral service. The Carter family are still trying to cope with her death. But another problem comes up on the day of her funeral when Linda returns to Walford.

The Carters made it clear that Mick’s estranged wife isn’t welcome but she attended the service anyway. Things start to heat up when Mick gets too emotional when paying his tribute to Tina.

Linda gets upset and embarrassed when Janine comforts Mick instead of her. The former gets even more furious when she realizes that Janine was “Judith Bernstein,” the woman who convinced her to divorce Mick last Christmas.

Later on, Linda and Janine clash at the pub after the funeral. Linda gets frustrated when she sees Janine try to win Mick’s affections. She drowns her sorrows in alcohol and turns up drunk at the pub.

She then confronts Janine and their heated conversation leads to a brawl. In a shocking move, Mick takes Janine’s side instead of his wife. After things settled down, Mick makes a shocking confession to Janine

After the squabble, Mick thanks Janine for being by his side and for helping him get through his grief. The pair share a passionate kiss and that’s when Mick tells Janine that he wants to divorce Linda so they can be together properly. It seems as though Janine has finally got what she wants.

Will Janine finally get what she wants? Will Linda make the Carters see Janine for who she really is?

Fans may recall that Janine concocted a scheme that would prevent Mick from reuniting with his family for a New Year’s Eve celebration. Since then she’s been trying to manipulate Mick during Linda’s absence.

Mick has started to develop feelings for Janine and he has now reached a point where he’s willing to leave Linda for her. Will Linda make him come to his senses? Or is this the end for Mick and Linda?