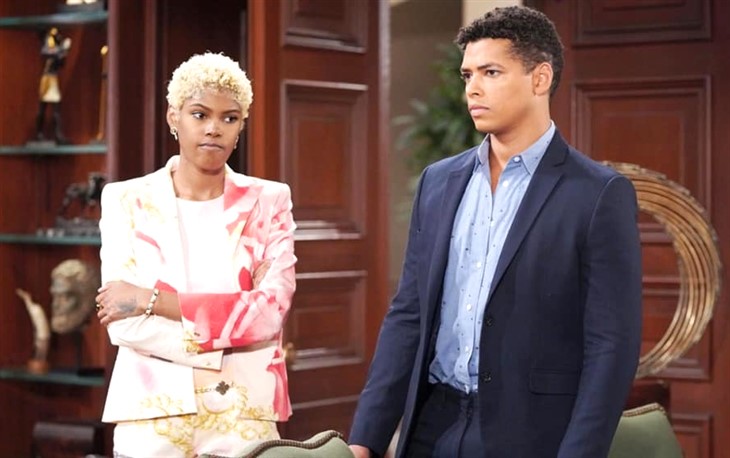 The Bold and the Beautiful (B&B) spoilers reveal that fickle Paris Buckingham (Diamond White) spies her beau, handsome Zende Forrester Dominguez (Delon de Metz) kissing another woman. What gives, is their love on the rocks? Is Zende pulling a fast one on the woman he wants to marry? Let’s unpack what is going to happen in the next few days and what fans can expect going forward with Paris.

The Bold And The Beautiful Spoilers – Paris Buckingham Has Amazing Hair

Paris and Zende’s relationship seems like the storyline that time forgot. Every now and then TPTB remember they exist and then whoosh, they are front and center, cooing like lovebirds and making goo goo eyes at each other. Whatever happened to ex-social worker Paris’ amazing job at Forrester changing people’s lives with a snap of her fingers?

Their story has been a mess frankly. The show has chem tested her with everyone but Charlie the security guard. It’s not that she doesn’t have chemistry with anyone, it’s that it is impossible to gauge her potential with a man when the fans see her falling for a guy for all of ten minutes then moving on to the next beefcake or himbo, like Thomas Forrester (Matthew Atkinson).

B&B Spoilers – When Will Paris Buckingham Settle Down?

Zende now wants to get married, but Paris isn’t so sure. Her doubt led her to kiss Carter Walton (Lawrence Saint-Victor)! Now explosive show spoilers reveal that she will see Zende kissing someone else during the week of January 3-7 when she catches him making out with a Forrester model.

The Bold And The Beautiful Spoilers – What Is Zende Forrester Doing?

Is Zende on the rebound after Paris rejected his marriage proposal? He doesn’t seem like a lothario, but hey, rejection hits some people hard.

Paris will think back to her illicit kiss with Carter and realize she can’t judge the pot for being on fire. What comes next? According to show spoilers Zende and Paris aren’t over—yet. What do you think of this pairing B&B fans? Do you ship Paris and Zende? Or do you prefer Paris and Thomas? Or maybe Paris and Carter sounds good? What about Paris and John Finn (Tanner Novlan)? Do you see where we are going with this? Enough already, let Paris find happiness with someone or set her loose to save the world as was her original intention. In other words, fish or cut bait.