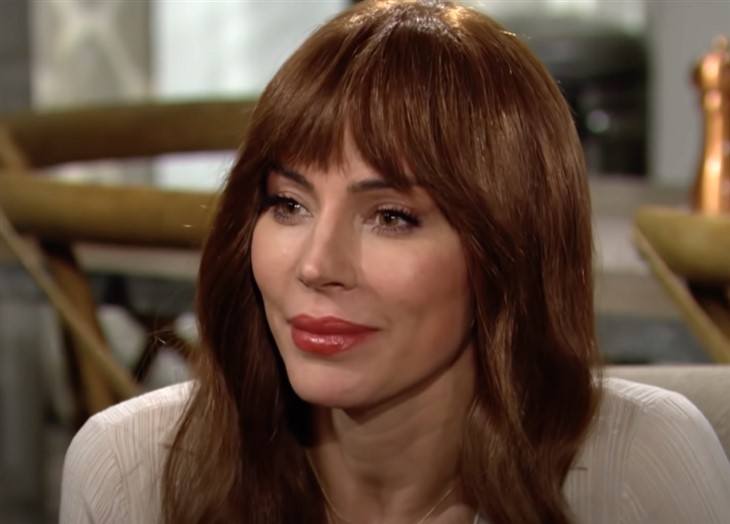 The Bold and the Beautiful (B&B) spoilers for the next two weeks tease 2022 starts off with a bang. From January 3 to 14, there will be two shocking discoveries. Taylor Hayes (Krista Allen) makes a horrifying observation while Paris Buckingham (Diamond White) has a family reunion. Plus, will Douglas Forrester (Henry Joseph Samiri) tattle on granny kissing Santa Claus?

B&B spoilers for the week of January 3 reveal that Paris needs to give Carter Walton (Lawrence Saint-Victor) an explanation. Carter might get his hopes up after being kissed by Paris. However, Paris still just views him as a good friend, so she will need to explain why she kissed him. However, Paris is not the only one who shares a kiss with someone other than her significant other.

Paris catches Zende Forrester (Delon de Metz) kissing a Forrester Creations model. Paris doesn’t get upset, though. In fact, she’s happy for Zende, especially since he seems to really be into the model. Zende and Paris won’t break up, though. For the time being, they will stay together but agree to have a more casual relationship.

Sheila Carter (Kimberlin Brown) set up Brooke Logan Forrester (Katherine Kelly Lang). Unfortunately, Brooke fell into the trap and drank real champagne instead of the non-alcoholic bubbly she ordered. Brooke continued to drink after the bottle was empty and convinced Deacon Sharpe (Sean Kanan) to join her.

Brooke wakes up and finds Deacon laying on the bed with her. Deacon put Brooke to bed after she passed out, then he fell asleep too. They just happened to be sleeping in the same bed, but not with each other. Still, try explaining that nothing happened to Ridge Forrester (Thorsten Kaye!)

The Bold and the Beautiful Spoilers – January 3-7

As for what else to expect, Ridge wants to know why Brooke was with Deacon on New Year’s Eve. Brooke eventually confesses to drinking, but does she admit to kissing Deacon? It seems she doesn’t as Ridge stands by Brooke’s side. However, expect Douglas to say something. Douglas might not tattle right away as he wasn’t supposed to leave the cabin, but did anyway. Eventually, Deacon confesses to Hope Logan Spencer (Annika Noelle).

Sheila will visit Taylor again, which leads to the villain venting about how much she loathes Brooke. Sheila is trying to get Taylor as an ally in the war against Brooke. However, Taylor will just be alarmed by the intensity of Sheila’s rage.

The Bold and the Beautiful spoilers for January 10 to 14 reveal that Sheila will take her revenge up a few notches. Brooke and Hope will have an emotional discussion and the truth about banning Deacon will probably come to light.

As for Zende, he decides to surprise Paris by arranging a reunion with a loved one. This could be a recast for Zoe Buckingham (Kiara Barnes) or it could be someone else, such as Paris’ mom. However, will Paris be appreciative or could she blow up at Zende?

GH Spoilers: Could Peter Have Gotten A Dose Of His Own Medicine?