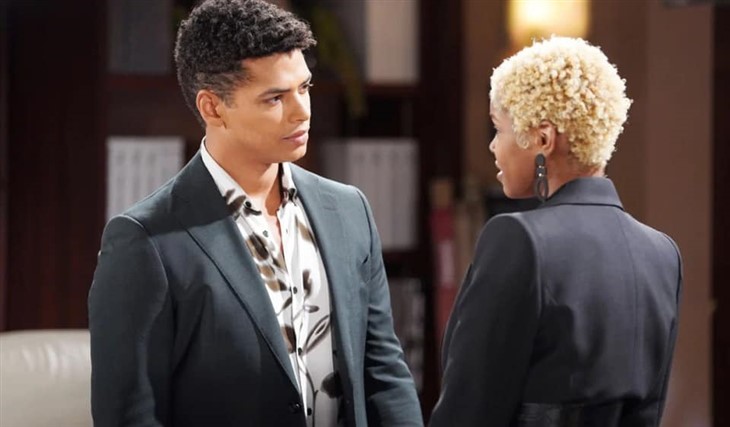 The Bold and the Beautiful (B&B) spoilers reveal that Paris Buckingham (Diamond White) kissed Carter Walton (Lawrence Saint-Victor). However, Paris isn’t the only one kissing someone else. She catches Zende Forrester (Delon de Metz) locking lips with a model. Does Paris get jealous or not care? Does this mean that Zende is moving on with someone else?

The Bold And The Beautiful Spoilers – Kissing Carter Walton

B&B spoilers reveal that Paris panicked when Carter warned her that Zende was going to propose. Paris and Zende just happened to be at dinner. Paris was already stunned when Zende ordered the most expensive champagne on the menu. Then, he went to talk to a member of the staff.

Paris was already nervous about Zende’s “surprise” but when she got Carter’s text message, she kept talking about how great it is being single. Zende quickly got the point, although he was probably heartbroken. After dinner, Paris went to see Carter and the two shared a kiss.

It seems that Paris isn’t the only one kissing someone else. According to Soap Opera Digest, Zende does the same thing! Paris explains to Carter why she kissed him and just sees him as such a good friend. Then, she spots Zende kissing a Forrester Creations model.

The Bold And The Beautiful Spoilers – Paris Buckingham’s Reaction

The Bold and the Beautiful spoilers reveal that seeing Zende kiss someone else doesn’t bother Paris at all. That says a lot about their relationship. While Zende clearly wanted to spend his life with Paris, it’s clear that he just isn’t the right man for her. If he was, then she would get jealous or a bit upset at seeing her man kiss another woman. Diamond White explained to SOD,

“Paris realizes as much as she cares for Zende, she can’t have it both ways. She doesn’t want to get married… She’s [the model Zende kisses] beautiful and she is not upset. She wants Zende to be happy and have fun, so if it’s with someone else, then so be it.”

Even though both Paris and Zende kiss other people, they don’t break up. The couple stays together, but Zende does still try to give Paris the world. Zende actually reaches out to one of Paris’ family members and brings that person to Los Angeles.

However, will he regret inviting this person to reunite with Paris? After all, there might be a reason Paris never talks about her family. If Zende was hoping to score points with Paris, this “surprise” just might have the opposite effect.