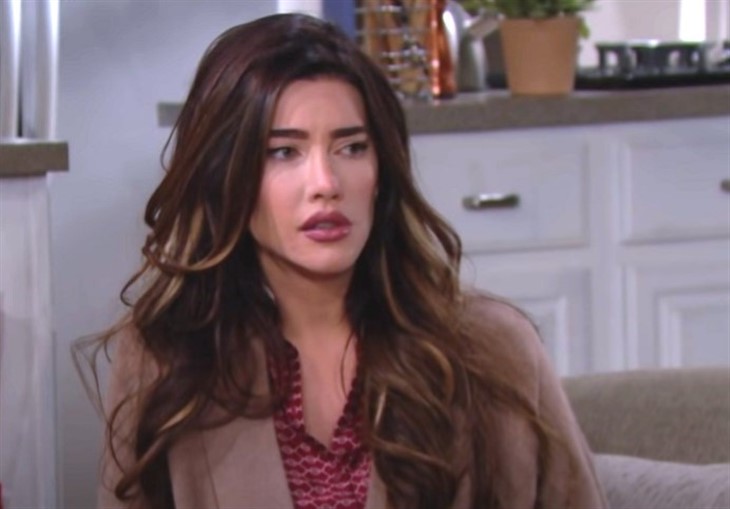 There had to be a reason that the couple made love for the last time shortly before Finn died, shot by accident by his own mother, Sheila Carter (Kimberlin Brown)! If Steffy conceived, it would be too early for the fetus to be harmed by Steffy’s shooting, short coma and her surgery, or any medications that she may be on, and a second child would give Steffy another little piece of her late husband to love.

Viewers of the Bold and The Beautiful wouldn’t be surprised if this storyline evolved, with the two grandmothers bonding so strongly and in such a dramatic way when Sheila and Taylor Hayes (Krista Allen) saved each other’s life!  Sheila was so devastated and distraught, as well as filled with guilt and remorse over killing her own son that she tried to jump off the roof of the hospital. Viewers will recall Taylor followed her and as she tried to pull her off the ledge Sheila slipped and Taylor flipped, but Sheila was finally able to pull her back up!

B&B Spoilers – The Couple Had Not Planned Another Child Right Now, But Things Happen!

Even though Finn and Steffy probably hadn’t planned for another child yet, things happen – a mother retains a natural birth control usually as long as she’s nursing. However, baby Hayes Finnegan (Piper Harriot) hasn’t been seen in an episode since Christmas, and that’s been several months – chances are he’s been SORASED enough to have recently been weaned, since viewers don’t see Steffy bringing her breast pump to work!

Steffy may not have started back on birth control if she takes birth control pills as her contraception method, but even the pill isn’t absolutely fail proof – forget a pill, and it throws everything off. Viewers of The Bold and The Beautiful know that Steffy’s been distracted enough by Sheila and following Thomas Forrester (Matthew Atkinson) around to see what he was up to with Sheila to forget a pill or two! That means that she could experience an unplanned pregnancy!

A new, unplanned little Baby Finn could be a blessing in disguise for Steffy and the Forresters, and Sheila too, since Taylor has fully accepted her. Steffy just awoke from her coma on The Bold and The Beautiful, and while she recognized Sheila, who had slipped into the room and was standing in the back, she may not remember what happened to Finn.

Once she does, or she is told what happened and that he is dead – one of her biggest disappointments is that they could not build the family that they wanted and had discussed, probably waiting for the right time. Finding out that she is pregnant will help soothe the grief and devastation she’ll feel, knowing that Hayes will have the little brother or sister they wanted to give him!