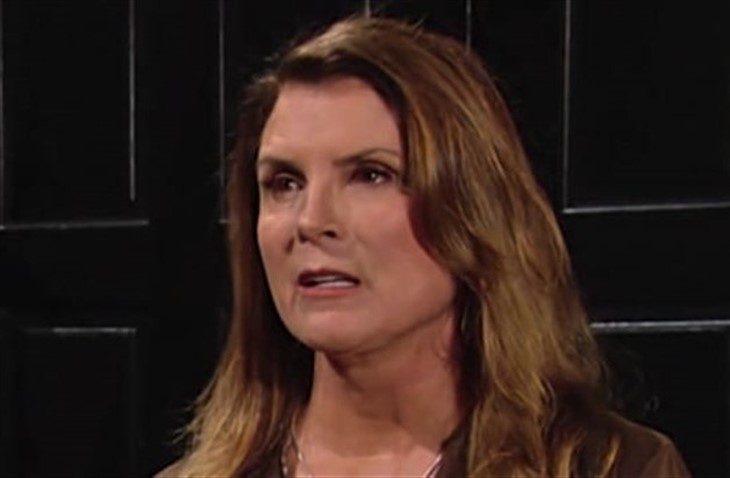 The Bold and the Beautiful (B&B) spoilers document that Sheila Carter (Kimberlin Brown) hid her stunned reaction to Steffy Forrester Finnegan (Jacqueline MacInnes Wood) surviving the bullet she put in her. Brown’s character realized that meant a witness survived and could report her crimes to the authorities.

Deacon Sharpe (Sean Kanan) was initially perplexed at Sheila’s reaction when relaying news of her son’s death, and Steffy’s fragile survival. But Sheila played it off as the fog of grief and even pushed a smile out as a form of relief pretense.

The Bold And The Beautiful Spoilers – Deacon Sharpe Has No Idea

Deacon never considered that Sheila committed the awful acts and cold-blooded response. He felt an animal would leave two shooting victims lying in that dark alley, while he consoled the guilty beast.

Sheila is the mentally deranged criminal who stopped Steffy from calling for help. So, Finn may have died after he spoke his last words to his wife. But it is plausible to wonder if Sheila would have allowed Steffy to make the call if the paramedics could have saved John Finn Finnegan (Tanner Novlan), even if Sheila proceeded to shoot her daughter-in-law.

Of course, Sheila should have called for help herself. But as a coward, her thoughts centered on self-preservation.

Bridget Forrester (Ashley Jones) termed Steffy’s condition grave. If only Finn could have that chance.

Steffy’s condition is, as savvy fans know, linked to Wood’s real-life situation. She and her husband are expecting the birth of their third child this spring. So, maternity leave may already be playing out.

Advanced scenes can allow Steffy to be unconscious for an extended period. There is no news of Wood leaving the cast, as appears to now be true for Novlan.

So, at some point, Steffy will awaken. But Sheila does not want that to happen because her daughter-in-law is the remaining living witness whose eye-witness testimony can send her to jail.

The Bold And The Beautiful Spoilers – Consoling Sheila Carter

Taylor Hayes (Krista Allen) was like Deacon. She had no idea that Sheila was responsible for Finn’s death or Steffy’s potentially mortal bullet wound.

The sight of Taylor consoling Sheila while she cried and said she was sorry was great soap. Incredible performances by all involved in a storyline that has profound implications.

Sheila came to the hospital to see her son. But was she also there to attempt to finish Steffy off?

GH Spoilers: Who Could Jennifer Be Working With On The West Coast?