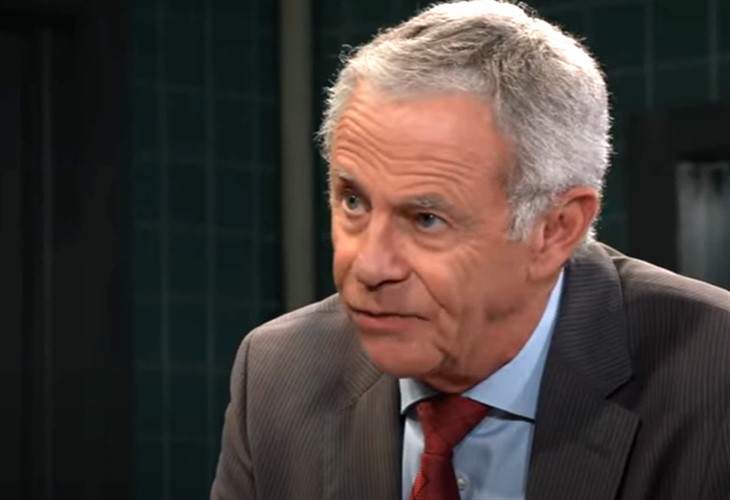 General Hospital viewers see Curtis talking to his ex-wife Jordan Ashford (Tanisha Harper) and he has some questions for her. It sounds like he is trying to clarify something for her that she has asked him, as he wants to know if something is both of them or one in particular.

General Hospital viewers know that Curtis and Jordan have actually not gotten the divorce they think they have because Stella Henry (Vernee Watson) failed to mail Jordan’s signed divorce papers several months ago when she had a stroke and the papers were destroyed. It almost sounds like Jordan has posed a rhetorical question to Curtis, as it sounds like he’s asking her if she’s in love with both of them or one in particular!

Speaking of love matches, Brad is looking over Britt Westbourne’s (Kelly Thiebaud) society setups matches with her and tells her if the answer is no, just tell him!

General Hospital viewers then see Robert Scorpio talking to Anna Devane (Finola Hughes), asking her if she believes that they really got justice for their friend?

General Hospital viewers will recall that Anna has been looking for answers and justice regarding Luke Spencer’s (Anthony Geary) death in a cable car accident in Austria, and recently found Jennifer Smith (Holly Gagnier) in possession of the Ice Princess!

Robert and Anna and Luke go back many years, as longtime General Hospital viewers will recall, and although Anna and Felicia Scorpio (Kristina Wagner) may have obtained a few pieces of the puzzle, there’s still no real justice for Luke!

Meanwhile, in Alexis’ office at The Invader, she asks a visitor what they want; it could just be that pesky Grant Smoltz (David Lautman) again, trying to get Alexis to publish his exposé on Nina Reeves (Cynthia Watros)!

It looks like Finn is talking to Elizabeth Baldwin (Rebecca Herbst) about an incident possibly related to the gaslighting and stalking she’s been experiencing, as he tells her she couldn’t possibly remember.

Perhaps Elizabeth has had another nightmare that may provide some answers as to what has really been going on, since Finn put Harrison Chase (Josh Swickard) to the task of finding out what was going on, complete with security cameras – or perhaps the cameras or Chase discovered her sleepwalking!

Elsewhere, Felicia and Laura are talking and Felicia may be telling Laura about what happened with the Ice Princess and Jennifer’s Frenchman story, who Felicia also saw. Laura tells her that sounds like a Cassadine move, and she’d be right; “Captain Francois Olivier” was really Valentin Cassadine (James Patrick Stuart)!

At the Metro Court, it sounds like Harmony is ready to run after pushing Brendon Byrne (Josh Coxx) off a cliff; Willow asks her if she’s going somewhere!

Be sure to catch up on everything happening with GH right now. Come back here often for General Hospital Spoiler spoilers, news, and updates.