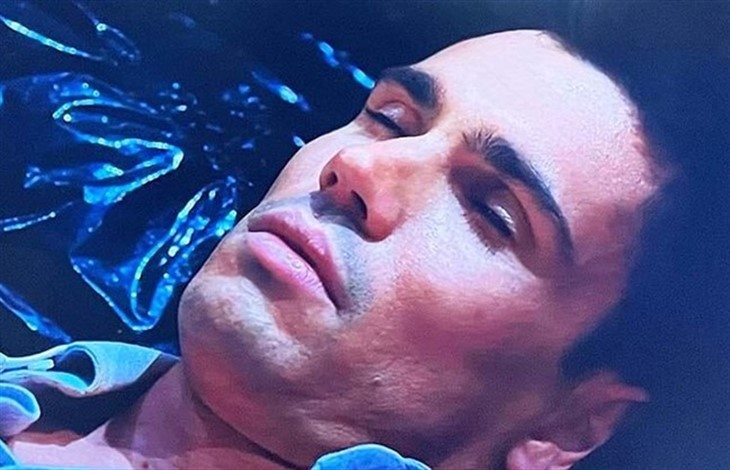 The Bold and the Beautiful (B&B) spoilers reveal that many fans are assuming John “Finn” Finnegan (Tanner Novlan) is dead. Although it appears that way, soaps are known to try and surprise fans. Plus, there is a reason Bridget Forrester (Ashley Jones) is in town at this exact moment. There is reason to believe Finn will be brought back to life.

The Bold And The Beautiful Spoilers – Sheila Carter’s Crime

B&B spoilers reveal that Sheila Carter (Kimberlin Brown) meant to shoot Steffy Forrester Finnegan (Jacqueline MacInnes Wood). All those voices started echoing in Sheila’s head and she didn’t hear Finn burst through the door. As Sheila pulled out her gun and spun around to pull the trigger, Finn was hit. Finn was able to tell Steffy that he loved her and then seemed to code.

Then, Steffy went to dial 911 and told Sheila she was going to spend the rest of her life in prison. Still holding the gun, Sheila aimed it at Steffy, and it appears she plans to kill her. That was the end of Friday’s episode. One question that fans have is if Finn is really dead or not.

During the week of April 4, Deacon Sharpe (Sean Kanan) will make a horrifying discovery. It is also stated that Deacon comforts Sheila, who is frantic. Plus, it is confirmed that as the week goes on, Sheila will worry that her “dirty deed” will come out. So, those are pretty big clues that Sheila isn’t arrested for murder or attempted murder.

Since Deacon is comforting Sheila and not blasting her, it seems as if he could be told a completely different story. Deacon and Steffy are not friends, but the former prison inmate is trying to be someone Hope Logan Spencer (Annika Noelle) can be proud of.

Plus, Deacon has insisted in the past few weeks that he cannot be seen with Sheila. So, if he knew she shot Finn and tried to kill Steffy, Deacon would probably tell the police. Since Sheila remains free, Deacon probably doesn’t know the truth.

The Bold And The Beautiful Spoilers – Taylor Hayes Mediates

The Bold and the Beautiful spoilers reveal that Sheila tells everyone about her plan to be a mother to Finn. That suggests that Finn is alive rather than dead. Finn might have died after being shot, but medical professionals bring people back all the time. If medics get to Finn immediately, there might still be time to save him.

Sheila will face backlash over her declaration to be a mother to Finn, though. Li Finnegan (Naomi Matsuda) arrives and battles Sheila about that. Plus, Taylor Hayes (Krista Allen) tries to keep the peace between the two women. So, that is another clue that Finn somehow survives.

Since Sheila isn’t arrested, there are probably no witnesses telling the police what really happened. Wood is going on maternity leave, so Sheila might silence Steffy by shooting her. However, we don’t think Steffy dies but ends up in a coma. That would explain why later in the week, Sheila worries her secret will get out. If Steffy ever wakes up from that coma, she will tell everyone the truth.

Now, what about Finn? It is stated that two characters bond over a near-death experience. That could be referring to Finn or Steffy at this point. However, if Finn makes it, then why wouldn’t he tell everyone that Sheila shot him when the gun was aimed at Steffy? It’s possible that Finn might not remember. Sheila might cook up a story to make it seem as if this was all a terrible accident or worse… that Steffy was the one with the gun.

It is stated in Soap Opera Digest that Sheila finally gets what she’s always dreamed of. Sheila has made it clear that her dream is a real relationship with Finn. So, she can’t have that dream come true if he is dead. Even though Sheila might get away with her crimes right now, the truth always comes out in the end. Stay tuned to find out what happens as this storyline progresses.